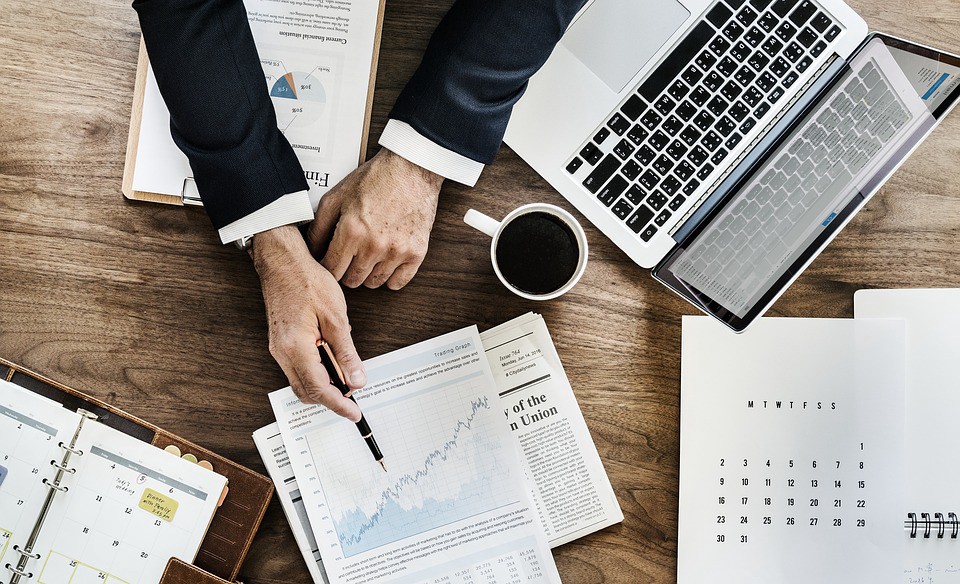 Amid China’s capital winter since mid-2018 triggered by the deleveraging of financial markets and overall economic downturn, the first half of 2019 saw a downtrend in terms of funds raised by China-based ed-tech ventures. Meanwhile, stricter regulations targeting at certain sub-sectors have deepened public perception of investment risks, resulting in a plunge in the number of deals closed in 2019 H1 which shrank by half compared to the first half of 2018.

JMDedu analyzed these 184 financing deals with the total amount of 18 billion yuan ($2.6 billion) disclosed in 2019 H1 by June 17th and sorted out the dimensions of sub-sector, amount, regional distribution, and financing round. Most of the Chinese data in this piece are collected by two China-based vertical media companies: iyiou and 36kr. 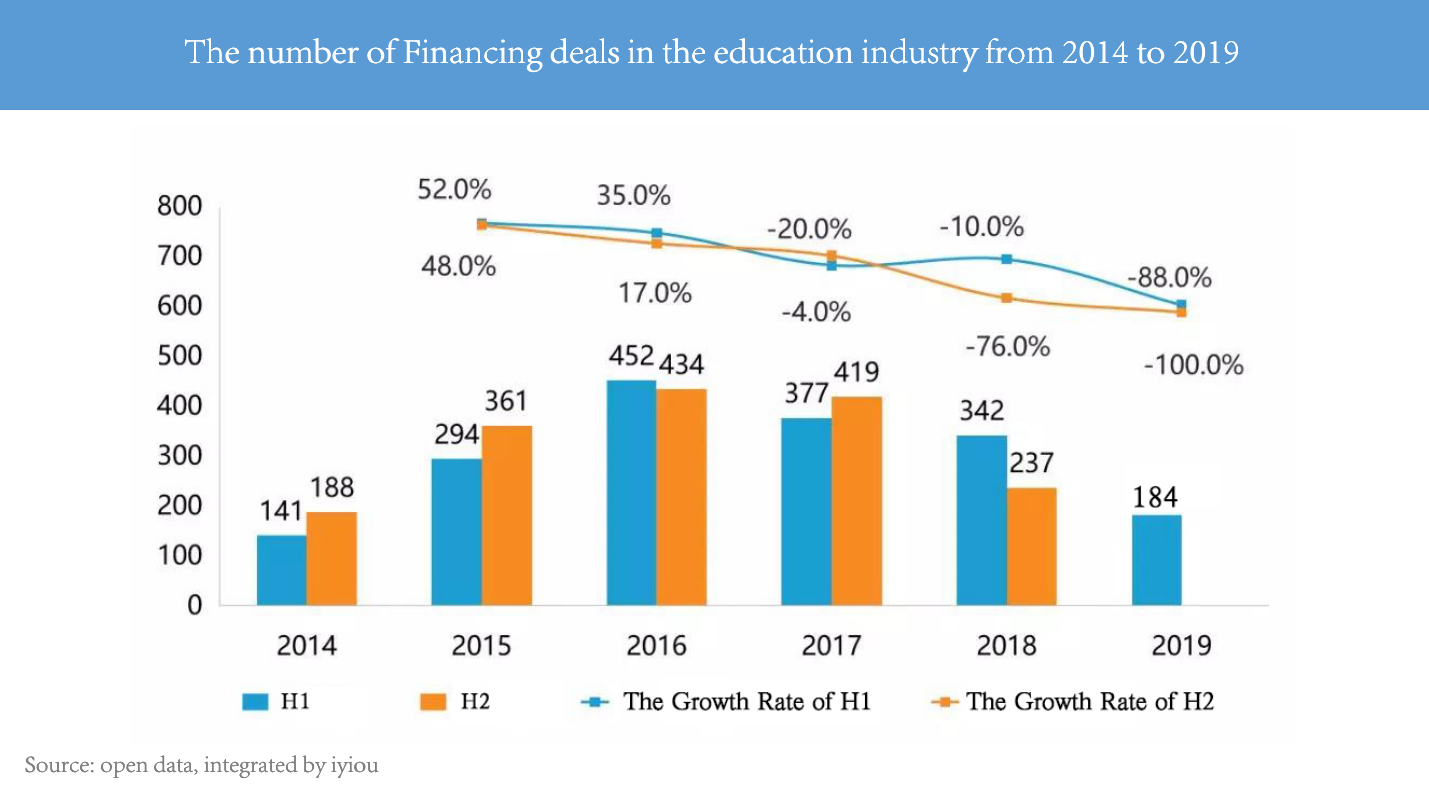 In 2014, start-ups in online education were just on rise thanks to the development of Internet. A wide range of educational innovation models have been launched. And 2014 also witnessed the most rapid growth of investment and financing in China’s education market, with a year-on-year growth rate of 173%. But it is normal that unprecedented boom is always followed by investors’ rationality. According to statistics, since 2016, the number of investment and financing deals began to slump and actually the growth rate has declined year by year after 2014. There are reasons to believe 2019 is a pivotal year for investment in education space that a war of vying for capital might unfold in China. 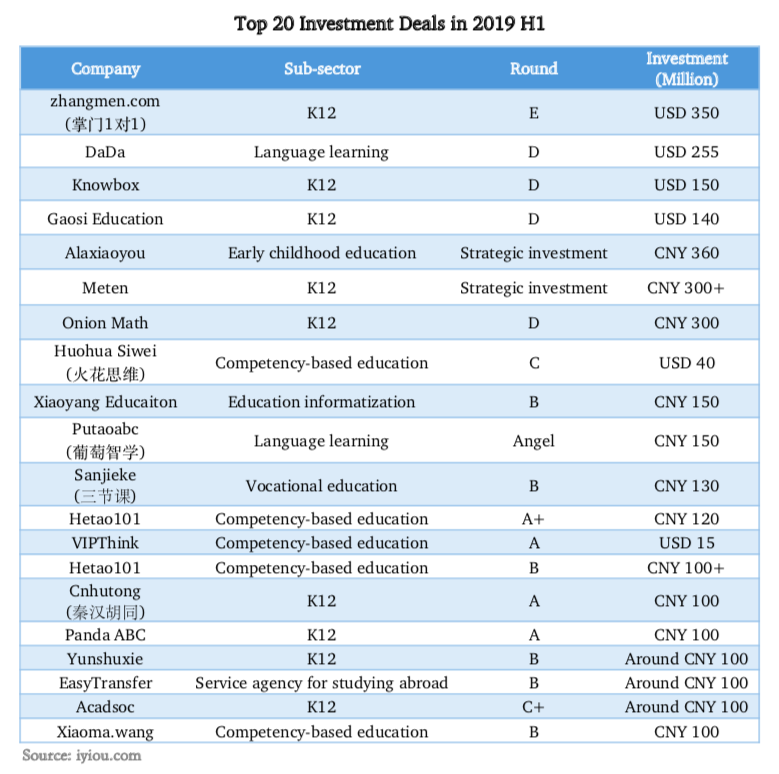 The chart above reveals the top 20 deals in the first half of 2019. We can see that mature companies are more welcome by USD funds, accounting for more than half of the top 20. Among them, the proportion of competence-based learning and K12 has reached around 80%. It is worth noting that Zhangmen, Knowbox, and Gaosi Education are the companies that have raised a large amount of funding after their Series D round. This has something to do with the relatively mature development of K12 after-school subject tutoring. Moreover, kid English learning and kid coding can raise more than 100 million yuan in their A round and Angel round which indicates that investors are still optimistic about the constant growth of these two markets.

While in terms of the overall financing amount distribution, RMB investment is still the mainstream. Compared with the same period in 2018, investors tend to cool on Chinese education start-ups in 2019. And according to statistics, the funds are still concentrated in first-tier cities. Enterprises that have secured funding in H1 are mainly distributed in Beijing, Shanghai and Shenzhen.

Deep dive: breaking down the investment by sub-sectors 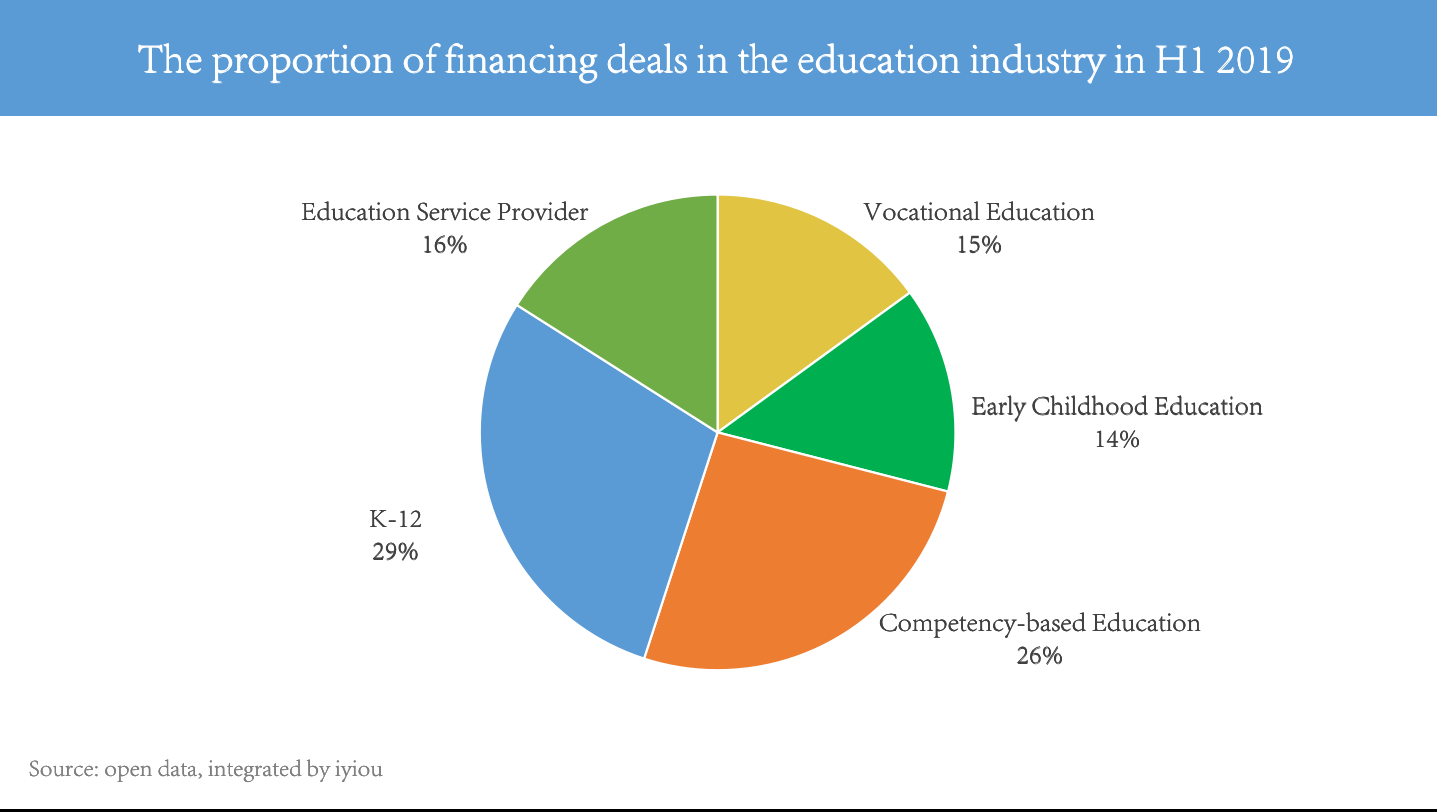 Overall, among the 184 financing deals disclosed in the first half of 2019, K-12(52 deals), competence-based learning (48 deals) and educational service providers(30 deals) are the top 3 sub-sectors followed by early childhood education (26 deals) and vocational education (28 deals). A handful of outsized rounds account for a substantial percentage for competence-based learning and K12 after-school tutoring. Either the cultivation of students’ competency or exam-oriented ability, the education expenditure for the age group 6–18 still represents the largest percentage. 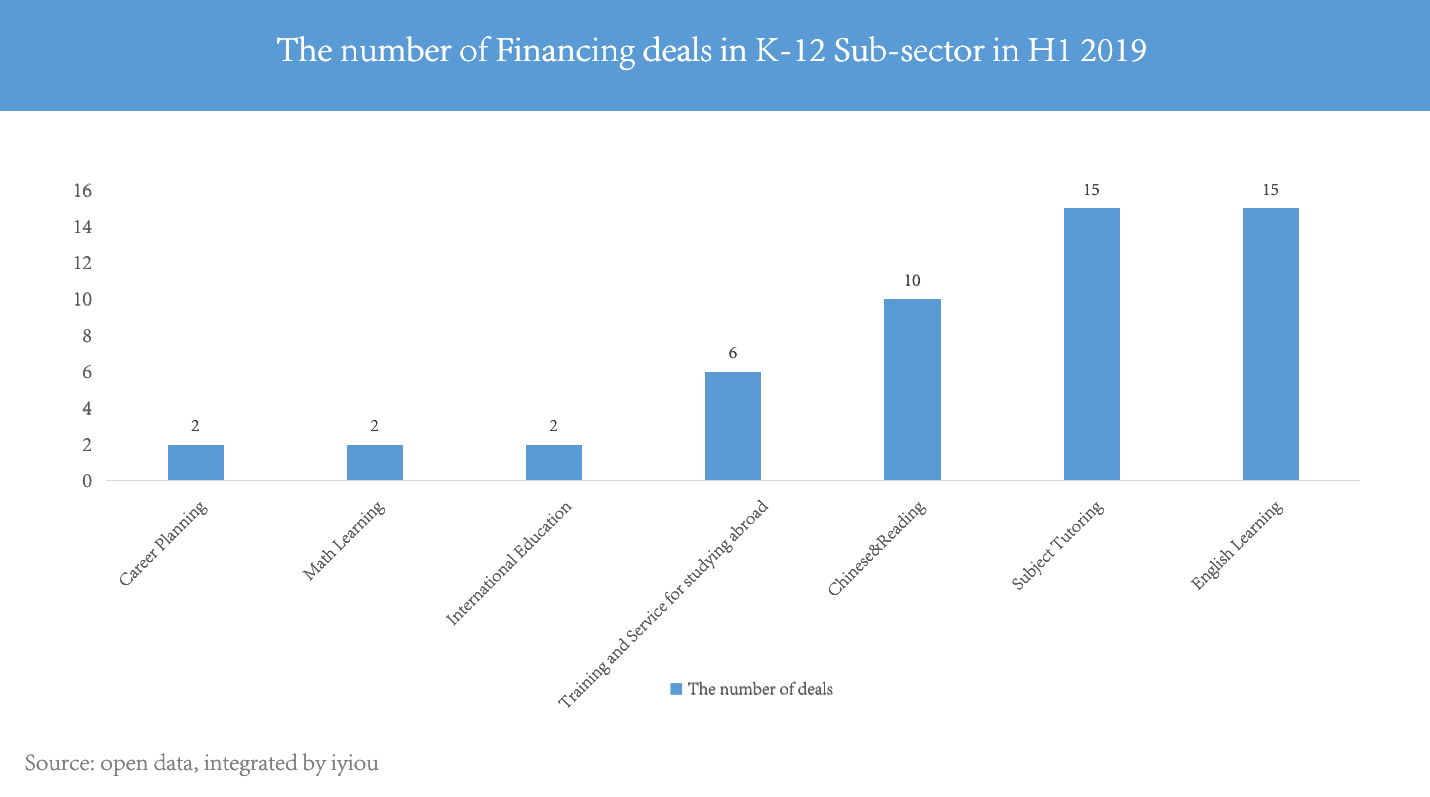 When we look at K12 space, English learning and all-subject tutoring raised the most money with each closing 15 deals. And the financing of all-subject tutoring is basically concentrated in the middle and late stages so small players or latecomers are hard to survive in this market, widening the gap between small and medium-scale institutions and those top players. Big Chinese (a new subject-based learning mindset and advocates a comprehensive Chinese language training), a buzzword in China’s ed-tech space in 2018, comes third with 10 deals. Chen Weihao, a partner of Warburg Pincus, once inferred: “one-on-one tutoring will enjoy an annual growth rate of 20% in the next five years, which will form the market size estimated to be around 400 billion yuan. Top companies will close more deals with higher financing amounts, and this segment will usher in a dazzling growth of M&A deals, accelerating the industry reshuffle.” 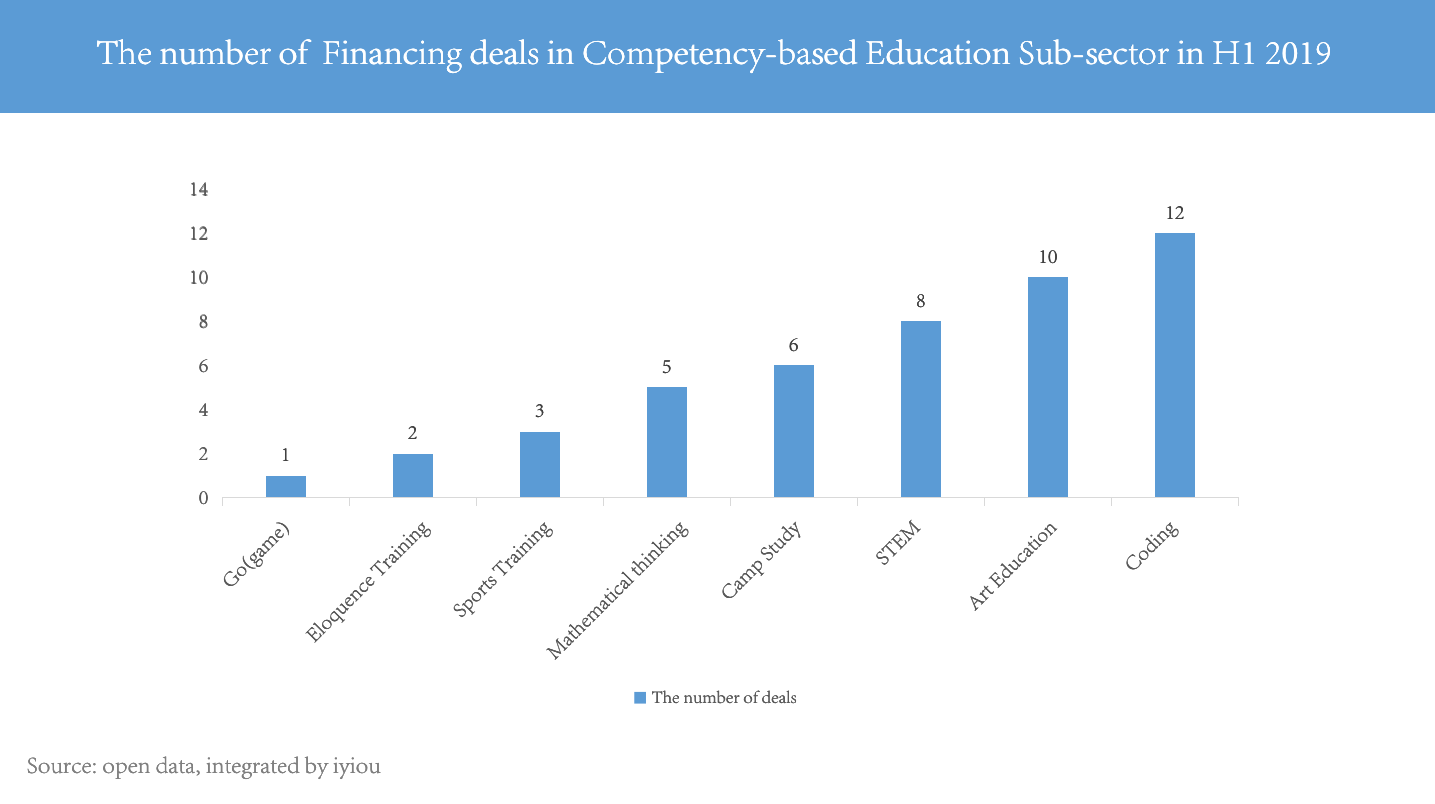 Financing of competence-based education slumped compared to last year, out of which the deals of companies majoring in coding and programming have decreased significantly despite ranking the first in this sub-sector with 12 deals. Apart from the top institutions raising over 100 million RMB, there are also some new players in their Series of Angel round. Plus, art training, including dance (2 deals), music(2 deals), opera (1 deal), and general art education (5 deals), has stood out bringing more creative art teaching models. While sports training, which some industry leaders are bullish about, has not met their expectations judging from the investment performance in H1. 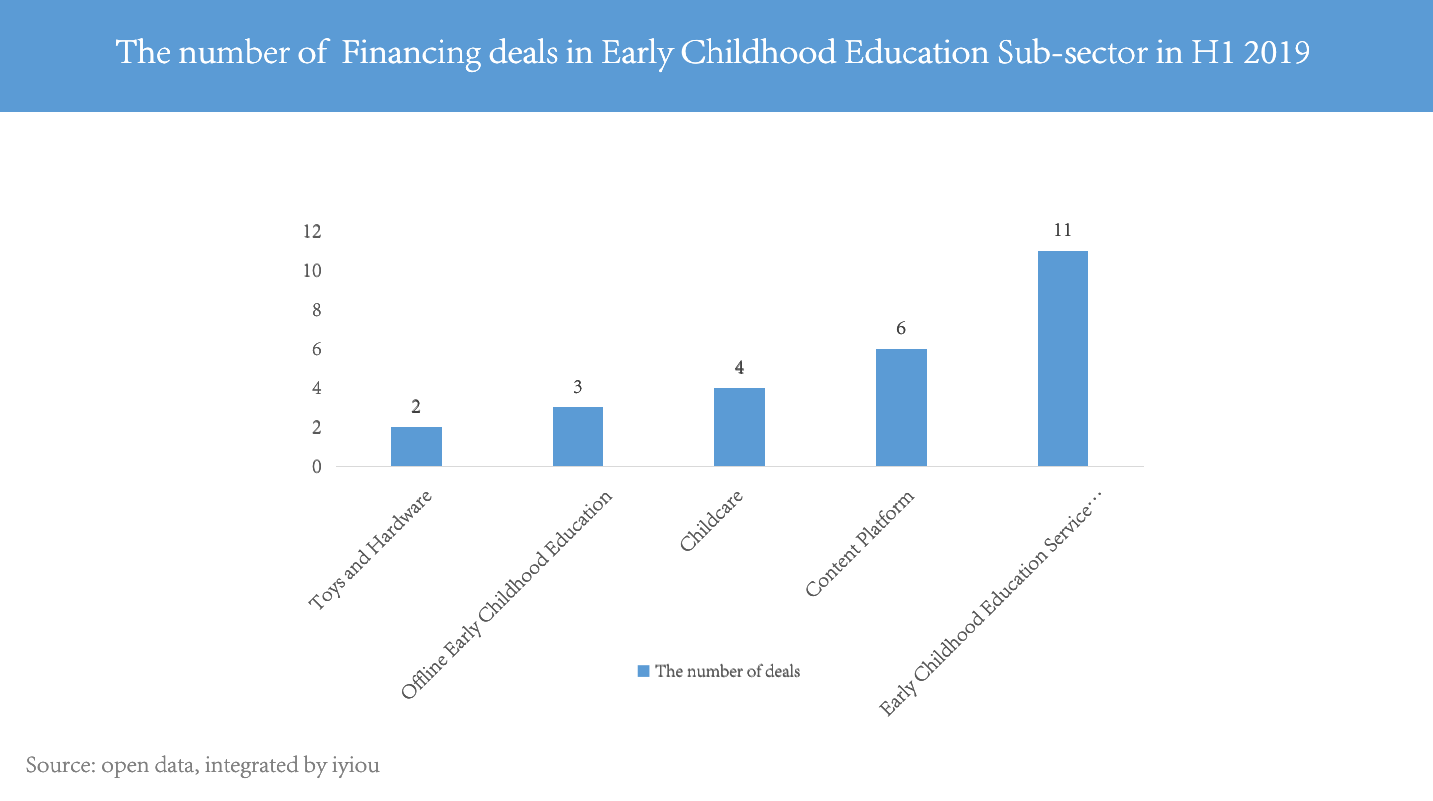 In educational service providers market, educational SaaS companies taking smart campus and big data service as main business have drawn much attention from the investors because of the demands generated by the reform of Chinese New Gaokao and the related policy known as Educational Informatization 2.0. In addition, the stricter management and control aiming for regulating after-school tutoring institutions and the overall upgrading of the industry has contributed to the burgeoning of toB service companies in the field of short video production, marketing, management training. 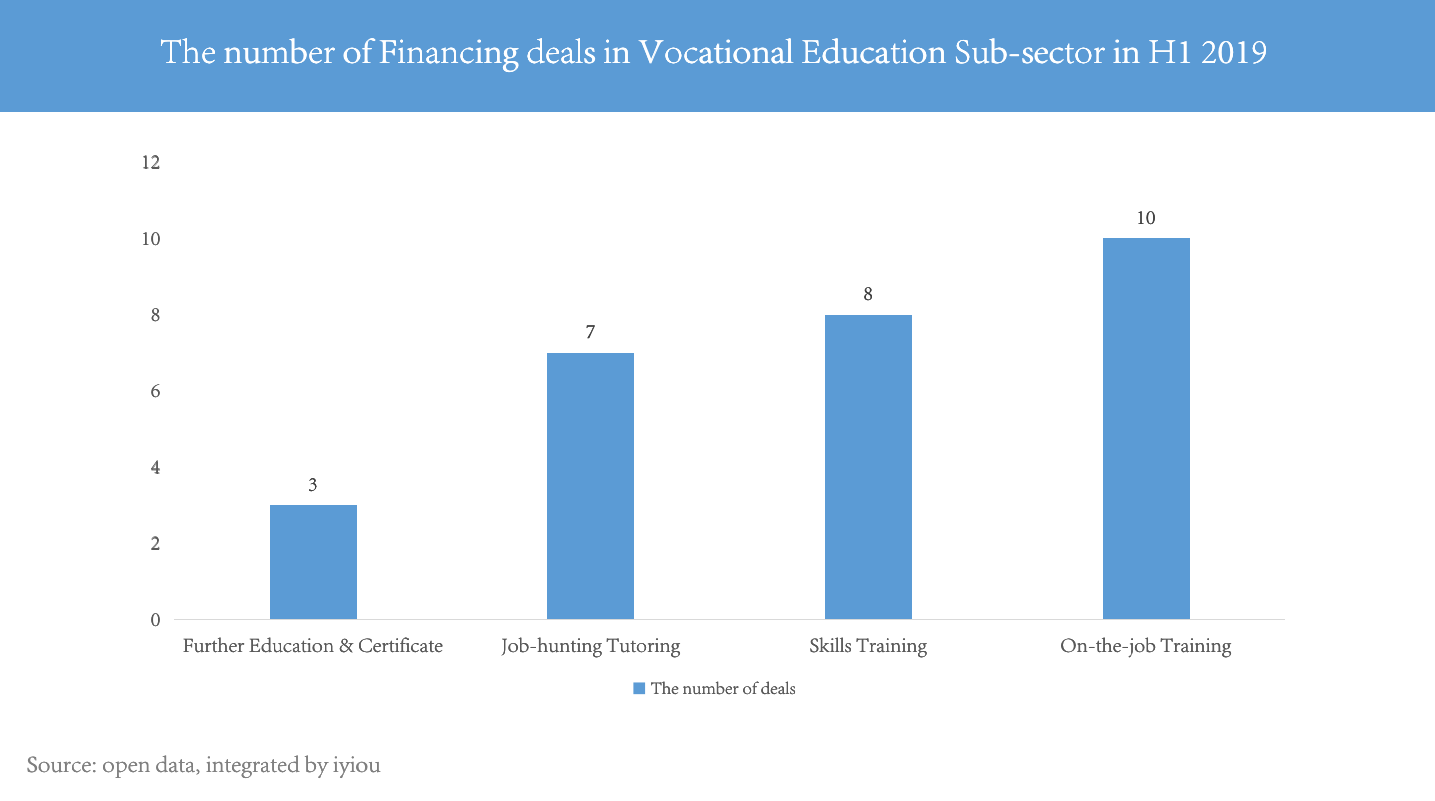 As for the vocational education market, most of the investors are from small-size capitals. And the ventures are scattered and niche but with large space to grow. Moreover, majority of funds in vocational learning are poured into asset-light companies that provide online platforms for non-degree education skills training. From the data, we can see that specializing in subdividing vertical fields, reaching target audience and having great growth potentials are the prominent characteristics of vocational education companies in 2019. Products for job-hunting also performed well in H1 because of their capability to bring together large traffic and big data. In terms of financing round distribution, companies at the early financing stage before Series A round accounted for 81%. The entrepreneurial enthusiasm in this segment has been gradually spurred by the market.

Future trends: China’s education industry is still on the rise

In the first half of 2019, education market has seen more possibilities driven by the release of new policies, the change of consumption upgrade, the implementation of new technological approaches. Moreover, given the market’s self-driven trait plus capital support, China-based ed-tech appears to be immune to the whiplash that has hit venture investing across other industries. Main drivers such as content optimizing, service upgrade and technological innovation will continue to bring about more opportunities and energy into the industry.