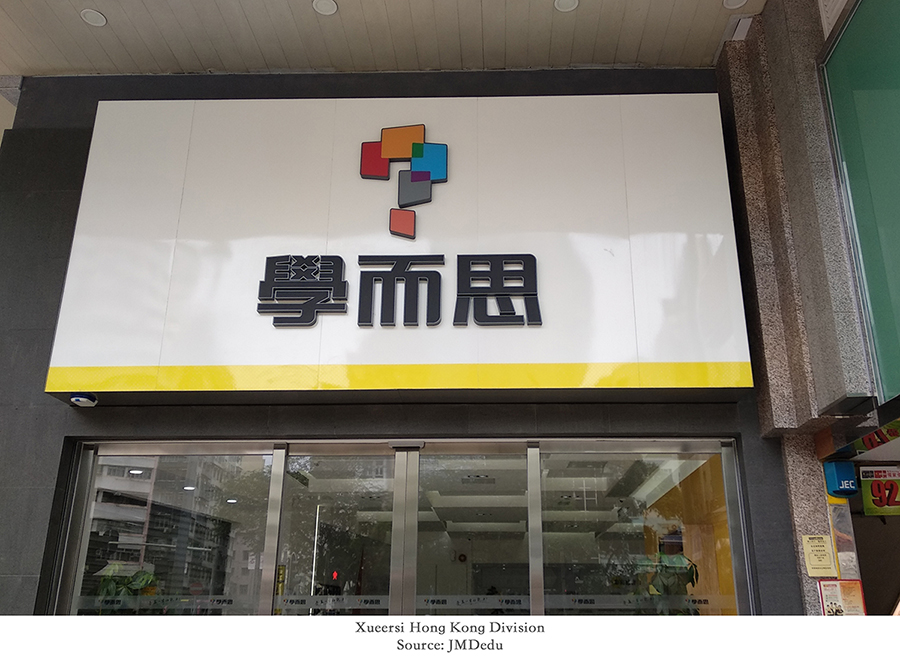 Earlier this year, Xueersi, the longest-running cram school brand under TAL Education Group, has set its first Hong Kong Division in the center of Prince Edward Commercial District in February. It was their first push to the after-school tutoring market beyond mainland China. According to local media Takungpao.com, the rent and decoration of the storefront which has three floors cost more than 100 million yuan. After half a year, what is the current business situation of Xueersi in Hong Kong? What impact will it have on the local brands? This story will unfold the K12 after-school tutoring ecosystem in Hong Kong.

The first thing that comes to our attention is the spacious consulting area with many exhibition boards introducing Xueersi’s characteristics, regulations and history. The staff responsible for consulting told JMDedu: “In Hong Kong, our company still follows the original business-running idea, that is, students are only allowed to register if they pass the entrance test. And students will be arranged into different classes according to their academic level.

Going up to the second floor, there is a rest area for parents and 8 classrooms, plus, an infirmary and a space providing teaching materials and lecture notes for parents to read. Something unique about Xueersi is allowing parents who have enrolled their children for tutoring courses to audit the class. This practice is unprecedented among local brands mainly because of their limited space and the quality control of the teaching content.

Indeed, for a populous city like Hong Kong, an institution with such a large storefront is regarded as a luxury. During the visit, our journalist found that the small and medium-sized tutoring institutions in Hong Kong often choose to rent one of the offices in a building and cut it into different functional areas including an information desk and one or two small classrooms, which may only have a capacity for no more than 20 students.

Initially serving as a maths tutoring center in Beijing, Xueersi also introduced its flagship course into their Hong Kong branch, mainly targeted at primary school mathematics. According to its official website, Xueersi established the teaching and research team in Hong Kong since the summer of 2017 and held free lectures providing free study materials and counseling services in the early days before the formal establishment.

A parent told us that he wanted to enroll his child for the spring course but failed. The competition for the enrollment quota is relatively fierce. So far, Xueersi still just arrange a few classes and only provide the subject tutoring of mathematics. Excelling in mathematics is a “stepping stone” for well-known universities in Hong Kong. According to the enrollment requirements of the eight public universities in Hong Kong published by the Joint University Programmes Admissions System(JUPAS), the degrees in which mathematics accounts for larger proportion of the total score than other subjects is up to 42% in all the programs. Apart from providing exam-oriented education, Xueersi also emphasizes the business of maths thinking training on its Hong Kong official website: “the long-term goal of the course is to cultivate mathematical thinking, including the breadth, depth, relevance and rigor of thinking.”

Sarah Tsui, a local mother who has paid attention to Mathematical Olympiad tutoring sector for a long time, told us: “Due to a large school-aged population base, although many parents in Hong Kong want their children to attend private prestigious schools, students enrolled in government-funded secondary schools are still the majority.” That being said, the company’s unique selling proposition, parents’ craze for mathematical thinking training in the local market along with Hong Kong’s education environment totally proves that maths curriculum is undoubtedly the best strategy for Xueersi to tap into Hong Kong’s after-school tutoring market.

Emphasizing the dual-teacher model instead of “star teacher effect”

Different from the teaching style in local tutoring institutions, a new teaching model which has been prevailing in the mainland in recent years has also been brought to Hong Kong by Xueersi — dual-teacher model referring to a blended learning model combining the online lecturing teacher and local assistant teacher. A number of local parents told JMDedu that it was the their time to learn about this model and they felt quite satisfied with its teaching outcomes.

Sarah believed that: “compared to the teachers from Hong Kong Mathematical Olympiad Association, Xueersi’s staff are much younger and better at understanding the students’ inner world.” Actually, besides the two-hour teaching time, tutors will also give half an hour for previous question review before the class and another 30 minutes for after-class tutoring. Plus, the teaching contents and students’ performance reports will also be sent to parents via WhatsApp. “Each lesson costs HK$400, which seems to be relatively expensive. But I feel it’s worth the money I paid because my child can get more knowledge and a better learning outcome.” Said Sarah.

Beacon College, the largest after-school tutoring services provider in Hong Kong for secondary school’s students, provides three approaches for teaching activities: face-to-face(Live model) which is the mode most of the local tutoring institutions still rely on, playing course videos in the classroom(Video model) and Video+Live. If the number of enrolled students exceeds the capacity of a unit, the extra will be assigned to other classrooms and in most cases, they will be taught by videos. “Although the price of the Live model is a little bit more expensive than others, the learning outcomes could be better guaranteed. ” Said a parent.

In addition, when it comes to Hong Kong tutoring institutions, relying on the star effect of teachers to attract more students is a point that cannot be overlooked. Beacon College stated in its 2018 financial report: “The Group relies on five prestigious teachers to make profits that as of July 31, most of the income was generated from the courses and products offered by them.” Meanwhile, teachers can also receive considerable rewards that more than half of the Group incomes are used to pay for employee remuneration, totaling HK$210 million. 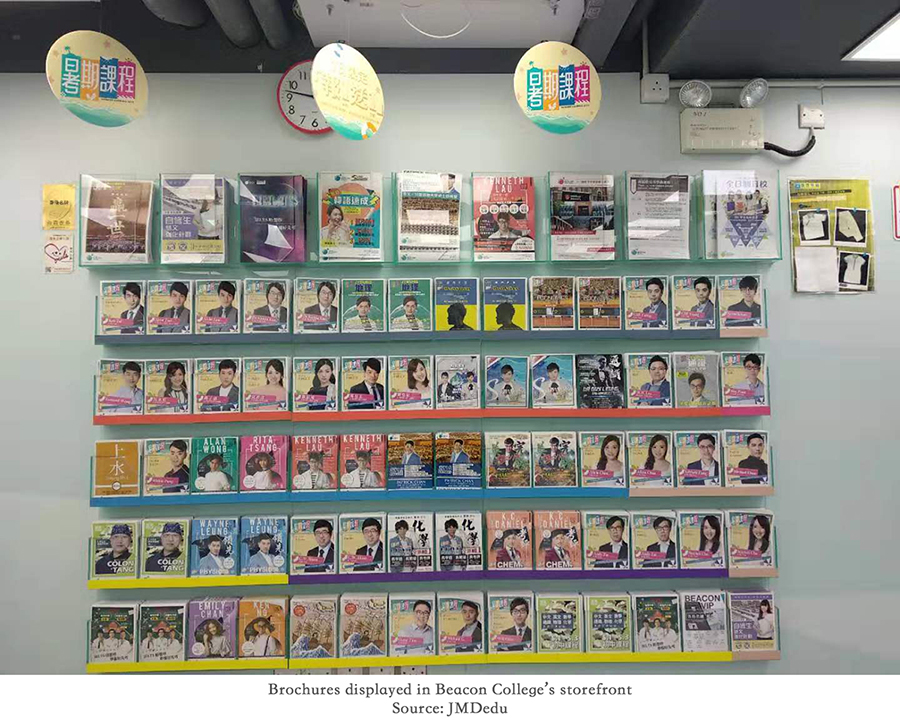 The “star teacher effect” existing in the local cram schools can also be reflected by the storefront furnishings. Beacon College makes separate brochures for individual teachers and displays them at the entrance. Moreover, in the marketing strategy of the large-scale cram schools in Hong Kong, it is common practice to post the posters of famous teachers on the entire wall.

In contrast, Xueersi’s mature marketing strategy has shown its advantage. Not relying on certain famous teachers, the company only puts teacher’s brief bio and curriculum design outside the classroom on the second floor. At present, there are 13 teachers in the Hong Kong branch and about half of them graduated from Hong Kong universities. According to Xueersi’s official account, the annual salary of their Hong Kong branch maths lecturer (responsible for online live broadcast teaching) could reach 300,000–400,000 yuan.

According to the statistics from Hong Kong Education Bureau, there are more than 1,200 primary and secondary school tutoring institutions in Hong Kong at the current stage. Local media has also reported that the after-school tutoring market in Hong Kong is polarized. Large-scale chain cram schools such as King’s Glory Education, Beacon College and Modern Education have occupied more than half of the market share while small and medium-sized institutions and private tutors are facing huge pressure of enrollments and operation.

Besides primary school and Mathematical Olympiad-oriented tutoring, secondary school is the market that Hong Kong tutoring institutions have been trying to seize. According to the latest financial report of Beacon College, nearly 90% of its income comes from business and services targeted at secondary school. Similarly, Modern education’s secondary tutoring business accounts for 50% of its total revenue.

Making a change to break through is what Hong Kong tutoring institutions have to do. One of the approaches is to strengthen the business targeted at primary school students, the number of which has grown from 320,000 in 2013 to 380,000 in 2018. Both Beacon College and Modern Education have mentioned in their financial report that the primary school tutoring business is becoming a strong driving force for the Group’s income growth. Besides, the two companies both indicate that they will offer more competency-based education service such as STEAM courses.

Meanwhile, Hong Kong companies are also looking for opportunities to tap into China’s mainland market. At present, Modern Bachelor Education, a sub-brand of Modern Education, has set two branches in Shenzhen. Wu Jingheng, the founder of Beacon College, showed strong aspiration of expansion and said at the Guangdong-Hong Kong-Macao Education Forum that the Group has already opened the Shenzhen office.

At the moment, the competition among local tutoring institutions tends to be increasingly fierce while Xueersi is already preparing for opening its second center in Hong Kong. Will the out-comer outperform those local ones?