“In China, the VR education market is growing fast. In 2016, the sum of VR education projects in public schools (government sourcing) was RMB 600 million. In 2017, the figure was doubled to RMB 1.2 billion. I expect it would be doubled again in 2018 to reach around RMB 2.4 billion.” — Yang Wei, CEO, VRschool 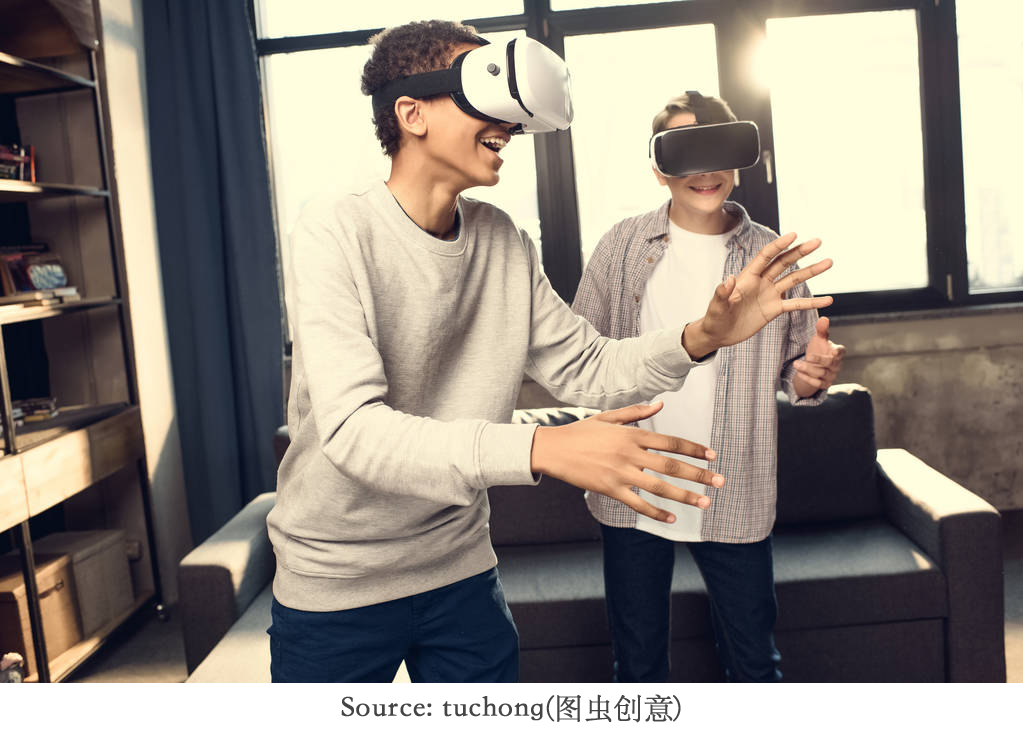 VR/AR education market, which used to be favored by Chinese capitals, seems to have suffered from a market crash in recent years. An insider even revealed that currently there are no more than five VR/AR education providers in China, namely, Fly VR(讯飞幻境), Growlib(格如灵), VRschool(微视酷), Mengke VR(萌科) and HEIVR(黑晶科技).

While amid a downturn in this industry, the survivors we mentioned above did not go down with the market and instead achieved considerable profits. These providers, starting their business from 2016 as the burgeoning period of VR/AR education in China, have witnessed the venture-capital bubble burst and now have to rethink their business layout if they still want to be in the game. That is, how to have public schools purchase their VR equipment? And how to expand the teaching content from a single package of resources to a systematic curriculum?

Market slump reflected by the number of new comers

Back in 2016, with the vision of creating a new learning environment that can deliver an immersive and replicate a real-world experience for learners, sometimes even beyond the real world, VR education is on rise and greatly associated with people’s imagination and fantasy. 36 companies have entered this space with their original corporate DNA. However, that number has sharply dropped that there has been only one new start-up established in 2019. “The market of VR education has encountered a certain downward trend judging from the number of new companies and the financing environment.” Said Yan Hongwei, CEO of Fly VR. But it is normal that an unprecedented boom is always followed by investors’ cooling on the market.

Even though the outsiders have hardly shown optimism the last couple years, VR education practitioners have started from scratch and grown rapidly in a quiet way by learning to distinguish good and poor hardware products. At present, the main hardware of VR education is the all-in-one teaching machine. Compared with the external and mobile head-mounted devices, these machines have their own OSD (On Screen Display), processing unit, interactive system, sensing system and thus are easier to carry and have better effects of imaging.

According to the data from “Chinese VR/AR Market Quarterly Tracking Report”(《中国VR/AR市场季度跟踪报告》), the shipments of VR all-in-ones increased by 43% year-on-year in Q1 2019. The popularity of hardware benefits from the falling price and advancement of the underlying technology. At present, the price of VR cardboard products on JD.com does not exceed 100 yuan(14 USD). And HTC Vive which is positioned as a high-level product is priced at about 5,000 yuan(708 USD). It is also predicted that the price of head-mounted devices will decline by around 15% in the next few years. Apart from the plunging price, the underlying technology supporting VR has also made substantial progress. The Qualcomm’s chips for XR device are reducing the production costs across the whole VR industry.

Four years ago, VR educational products were actually not ready to be unveiled in the market. That explained why the application effect was much lower than expected when launched and the industry quickly ushered in a cold winter in which some companies died out soon after, leaving those survivors with no choice but to find their own paths for breakthrough.

Compared with the VR educational products launched in 2016, products in this stage still maintain the characteristics of meeting the most urgent teaching demand by harnessing VR technologies. At present, a consensus has been reached that VR is essentially a teaching tool, entailing a matchmaking with the teaching content. VR means is now mainly applied into those microscopic, unusual or hazardous scenes and experiments. Yang Wei, CEO from VRschool also echoed that limitation and strongly advocated a wider foothold, in other words, how to penetrate public schools and have them purchase the VR educational products.

School procurement of VR educational products is mainly for the immersive science education scenarios such as patriotic education and safety education, vocational education, and K12 based experimental courses. However, these demands are too niche to generate profits for start-ups.

“VR education is unlikely to be regarded as an independent track amid the fragmented usage.” Said Yang Wei. The foothold he proposed lies in information technology courses in public schools, focusing on the huge demand in the whole K12 sector. At present, VRschool has been transformed into a STEAM education company with VR underlying technology edges, helping students to display their own works of building scenes through graphic coding via the VR devices.

Apart from market expansion, private enterprises are committed to exploring how to leverage technologies to fully benefit learning and teaching activities. The integration of hard-kill and soft-kill systems and the mix of virtual and actual reality have become the ideas that enterprises specifically emphasize when designing new products. However, a series of problems still hinder the development of VR/AR education such as discrepant quality of products, lack of diverse teaching content and high cost of R&D.

How to achieve profitability after the popularization of VR hardware

At this stage, the industry pain points of VR education have not been resolved. But as we mentioned above, there are still a few companies with considerable profits. Specifically, VRschool has already achieved positive cash flow; the revenue of Fly VR has reached 70 million RMB (9.9 million USD) in 2017 and the revenue of Growlib in 2019 is expected as 50 to 60 million RMB (around 7.8 million USD).

The current revenue is mainly from the toB business referring to public schools. Although the quantity is not huge, the high price of products is enough for companies and distributors to make profits. It is reported that the price of building a K12 VR classroom is at least 200,000 RMB(28,300 USD). And as for VR training space for university and vocational education, the price could reach up to millions of RMB. Meanwhile, as of October 31, 2018, among the 128 VR bidding projects that have been completed, there were 105 ones for education settings, accounting for 82% of the total. According to Yang Hongwei, the education reform in public schools advocated by China’s government is the biggest driver for VR education market. The “Key Points of Education Informationization in 2018” (《2018年教育信息化工作要点》) released by the Ministry of Education mentioned that “promoting the in-depth application of new technologies such as big data, virtual reality and AI in teaching and learning activities.”

But looking at the current hardware-based sales model, we can easily find such a hidden danger: with the falling price of hardware caused by the technology popularizing, the profit margin of enterprises and distributors will shrink. Therefore, how to adjust the profit model and how to shift the core business from hardware to content or software are the crucial issues for VR education companies to address.

Whether bringing VR to classroom is cost-effective

For enterprises, public school is a huge market. A founder once said that “the quality of hardware is guaranteed so the product that doesn’t work can be sent directly to the factory for replacement, avoiding heavy after-sales maintenance and operation.” But for public schools, especially K12 schools, there is not enough budget to use the new technology. Funding must come elsewhere for them to purchase VR equipment. Also when it comes to teachers who actually utilize the technology in classroom, they need to consider whether using the VR products or not and how to use them and they are wondering to what extent VR products can really help to improve the teaching and learning efficiency.

JMDedu had once observed a VR class in the High School Affiliated to Renmin University of China. Zang Chunmei, the head of teaching and research group, acknowledged the positive outcomes of VR application in many natural science subjects. But in terms of daily teaching activities, she admitted that “teachers won’t use them if they need to spend a lot of time but only get limited effects.” 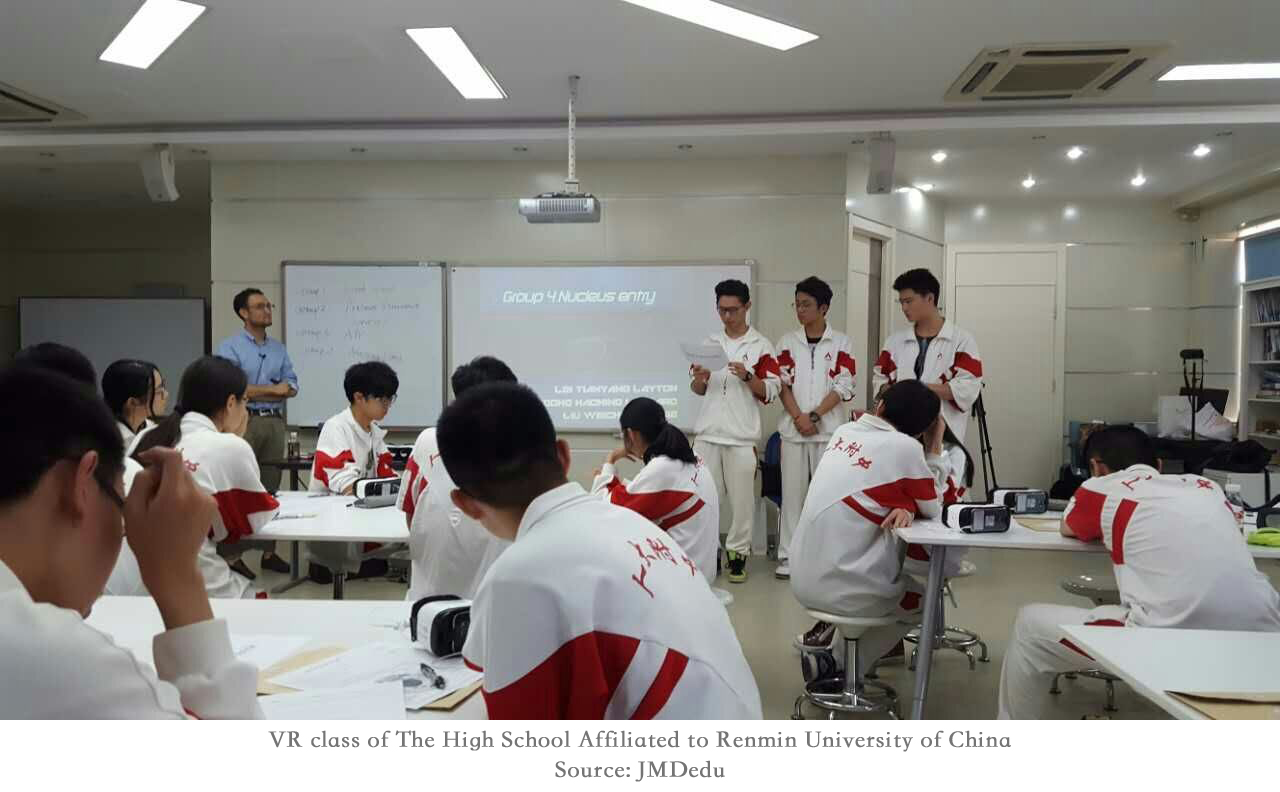 Forming a VR/AR product ecosystem for teachers to produce their own teaching content is impractical in a short term, agreed by many players in this industry. But when will the products be widely applied? Perhaps when the upward driver(market demands) and downward driver (policies) can well match, the promotion of VR EdTech can become a national strategy.

Technologies of big-screen have developed for nearly ten years which generated big enterprises specializing in educational informatization like Seewo. But at the current stage, VR education has only developed for less than five years. There is a long way to go. In the future, when the commercialization of 5G matures, the learning experience may be greatly upgraded. But the idea of VR to revolutionize education is still just envisioned.