中文
The world’s most valuable AI unicorn is implementing education initiatives in China
by Siyi Zhang
2019-07-04 12:18:42 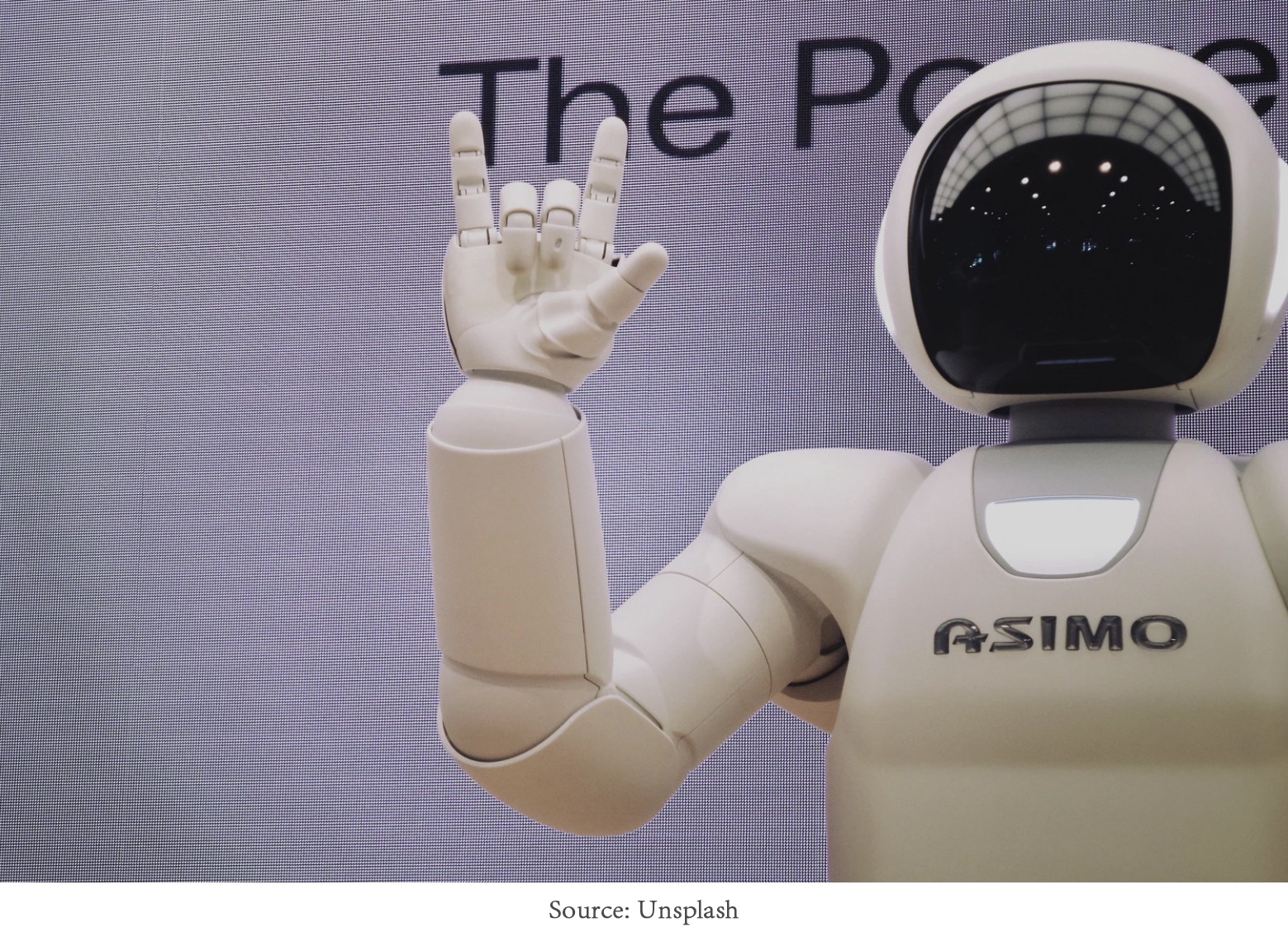 Approximately two months ago, we wrote an article unfolding the challenging tales of the current school-enterprise cooperation in AI education field from the perspective of schools, teachers and students since the release of “Three-year (2018–2020) Action Plan for Promoting the Development of the New Generation of AI Industry”. The country has unveiled its ambition to win the global AI race.

However, when focusing on the business layout of AI companies expanding in the education industry, it is important to understand whether the current policy brings them short-term profits or a continuous battlefield. In this piece, we will look into two major AI players in China to understand the path of grabbing the education market share. 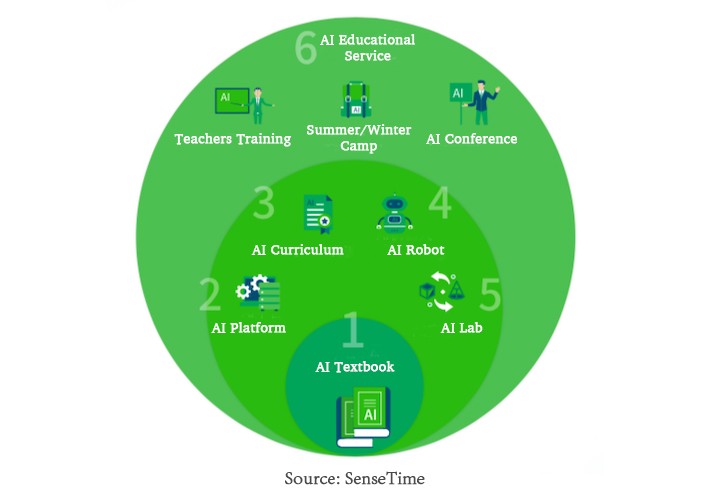 On May 5th, SenseTime, the world’s most valuable AI unicorn with a current valuation of $4.5 billion, released 11 products at its 2019 AI Summit, covering five major areas of smart city, healthcare, retail, education and AR. New products in education are oriented to K12, including textbooks, experimental platforms and educational robots. Currently, toG (government) business in K12 AI education has not yet become the mainstream in Chinese market, therefore, providing “a whole package of AI education solutions” is SenseTime’s blueprint at this stage.

Dai Juan, general manager of SenseTime Education Business Division, introduced: “most of our team are from academia backgrounds.” With such DNA, penetrating AI education industry seems to be a logical strategy for SenseTime’s operation. Conceived in H2 2017 and established as an independent division by 2019, SenseTime Education’s expenditure is currently supported by other segments and the main business is mainly divided into two parts: (1)AI education in primary and secondary schools and (2)AI empowering education.

The key point of enterprises diving into K12 AI basic education is mainly to provide supporting products and curriculum. “No one has yet defined a standard in K12 scenario,” Shang Hailong, co-general manager of SenseTime Education Business Division, said that they are now taking toG business as the orientation to provide the Education Bureau and schools with a whole package of AI education solutions, which is an inevitable choice for a fast business expansion. It is reported that SenseTime has cooperated with several provinces such as Shandong and Shanxi, and plans to close deals with around 1,000 schools this year.

The core of the “whole package of AI education solutions” targeting at primary and secondary schools is textbook. In April last year, SenseTime launched the high school version of AI textbook edited by Tang Xiaoou, professor of CUHK and founder of SenseTime. This year, the middle school textbook “Introduction to AI” was published and the primary school version has also been planned. SenseTime’s strategy is (1)solving “how to teach” through teaching materials, (2)addressing “who will teach” through teachers training, (3)tackling “how to learn” through the SenseStudy AI experimental platform, laboratories and robots, and lastly resolving “how to evaluate” through AI exchange showcases. Although there are still many aspects to be improved, at least SenseTime is one of the few companies that mentioned the idea of building the “AI Education Industry Chain”.

SenseTime’s AI Empowering Education is also a school-based business providing smart campus solutions, which is one of the scenarios where AI can be applied more maturely such as using AI to enable teaching and practice evaluation. However, in light of their goal of building an AI education industry chain, only relying on AI basic education is difficult to make profits. “We are still at the input stage and even don’t have a profitable agenda yet. With serving more schools and regional education bureaus, we believe that the marginal benefits will gradually be boosted.”

Apart from SenseTime, the number of companies intending to share the AI education market has been also increasing but they will always be exposed to a predicament that complex government procurement process hamper toG cooperation to spread rapidly and they often lack the input of education segment even the whole company have sufficient funds. For instance, according to iiMedia Research in 2018, China’s AI sector has raised a total of 131.1 billion RMB (19.23 billion USD) and companies in and after Series C round of funding are the majority among them.

Although SenseTime has pointed out in their C+ round of financing that they have already achieved profitable growth in 2017, the comprehensive layout of primary and secondary AI education still raises public doubts: Can education be a profitable point for SenseTime and later players? Although AI education is still not a mature business in SenseTime, there is still great room for every player to make innovation.

iFLYTEK: start its path by toG while getting out of the predicament by toB and toC 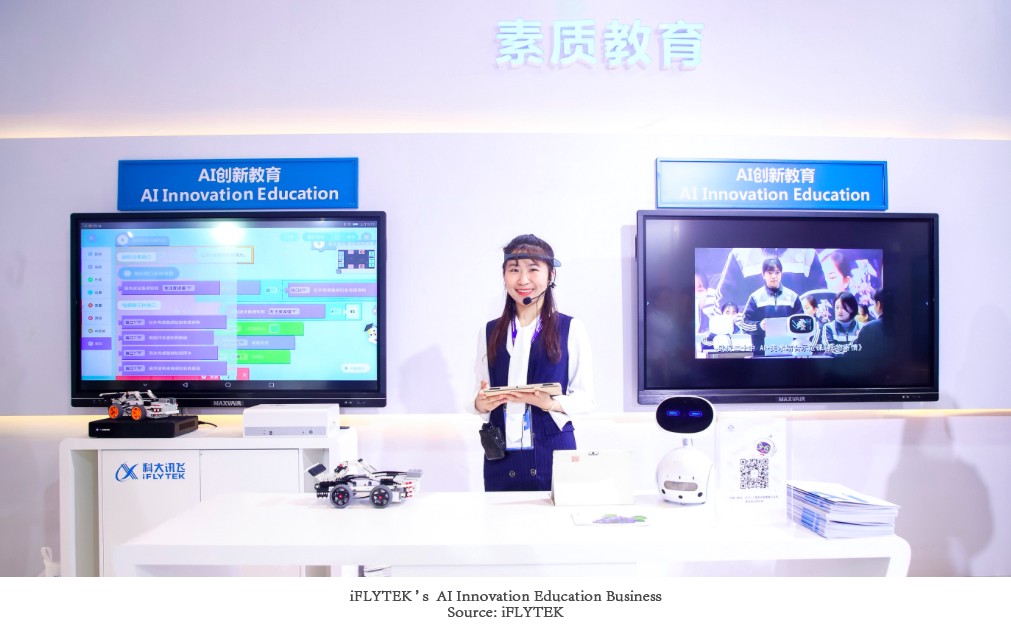 Besides some emerging and innovative startups, long-established AI companies are also gearing up to penetrate the AI education industry such as iFLYTEK. Twenty years ago, iFLYTEK was founded with the vision of “Building a beautiful world with AI”. In recent years, the Shenzhen-listed company has spread its business deeply into the education sector with a new positioning as an intelligent assistant tool with application development.

In 2017, the Chinese government officially listed AI development as one of the national strategies. Benefiting from this, the share price of iFLYTEK, which has certain technical research and development capabilities, has risen sharply and the total market value once exceeded 100 billion RMB (14.7 billion USD). Then iFLYTEK released ten products in the same year, six of which were for education sector. In 2018, the policy of Education Informatization 2.0 was launched, Internet giants such as BAT have turned their attention to this field and intelligent education has become a buzzword, while iFLYTEK has already seized a huge market covering more than 20,000 schools, serving nearly 100 million teachers and students by leveraging its first-mover advantage and competitive superiority in channels. In that year, the profit made by iFLYTEK hit 2.144 billion RMB (315 million USD), accounting for 27.08% of the total revenue. Among them, education products and services revenue were 2.015 billion RMB(296 million USD) with a year-on-year increase of 44.93%.

But now, just like Nuance, the world’s largest speech recognition company, iFLYTEK seems to be stuck in a similar dilemma. Both of them have advanced technology but lacks mature products and contents to attract users, and many of their former customers and partners have become their rivals with a strong competitive edge. Moreover, the education market still has lots of opportunities but is extremely fragmented, so it is very important for iFLYTEK to find a suitable trajectory to follow. When conducting the business layout, iFLYTEK’s logic is first toG (government), then toB (business), and finally toC (consumer). That is, penetrating the industry by intelligent exam service and promotion in classes and thereby reaching a wide range of users mainly as students and parents.

As for the reasons for penetrating education market from the G-end, Liu Qingfeng, iFLYTEK’s president, regards that iFLYTEK is a technology-based company so the point of penetration should also be involved with strongly technical attribute. “If the human-machine dialogue test mode is adopted in the large-scale national exams such as Gaokao and senior high school entrance examination, the government only dares to use the Top1 product so as to lower the risk of making errors which may influence students’ fate.” And speech recognition, understanding, processing technology is undoubtedly the strength of iFLYTEK. The 2016 annual report shows that during the reporting period, more than 10 provinces and cities including Beijing, Shanghai, and Guangdong, which have conducted English listening and speaking tests for college entrance examinations, have served 17 million candidates with iFLYTEK’s oral assessment system.

With the implementation of education informatization entering a new stage, the B-end market has become more and more lively. The business overlap between Tencent and Alibaba’s DingTalk is the smart campus and open platform. SenseTime we mentioned above focuses on AI public education, including textbooks, courses, and teacher training. But iFLYTEK’s To B business targeting at smart classroom is more similar to Baidu and TAL, which attaches more importance to the market share occupation. iFLYTEK’s 2018 annual report pointed out that the channel construction will be further strengthened in the education business field, and the layout on more developed regions and schools will continue to be promoted. From the perspective of marketing expenses, it has reached 1.726 billion RMB(253 million USD) with an increase of 55.3% YOY, which exceeded the total research and development expenses of 1.263 billion RMB(186 million USD). Although the “harvest” can be seen, iFLYTEK is still criticized for the profitability because the state support and government subsidies still account for a large proportion of their incomes.

Under these circumstances, iFLYTEK’s solution is to continue the “Platform + Sector” mode. “Platform” means building an open platform to converge enterprises and ultimately forms an ecosystem. And shifting to consumer market is another crucial layout of the mode.

Hu Yu, the co-founder of iFLYTEK, believed that toC business of iFLYTEK will occupy a soaring proportion in the future. According to the annual report, in 2018, iFLYTEK’s toC Business revenue reached 2.517 billion(370 million USD) with an increase of 96.54% YOY. The gross profit was 1.296 billion, up 70.77% YOY. ToC business has accounted for more than 30% of both overall revenue and the gross profit. In the field of education, the process from idea to realization, finally to promotion is undoubtedly a long way to go. In this long-term race, iFLYTEK might be the front runner, but the end of the game is still far in the unpredictable future.

Undoubtedly, policy support has driven the development of AI industry from 2017 to now, and it seems that the policy will not change in the next few years that the year of 2020, 2025 and 2030 will be the pivoting stage according to the plan released by the State Council. However, will the products and courses promoted by AI+ education companies exactly reach the schools and be accepted by the principals and teachers? Can companies create AI products that truly support education development before the arrival of each pivot? The answers will not only indicate whether the company can survive in this process but also test whether AI+ education market can continue to keep thriving.