“Turmoil” and “Reshuffle” are the perfect keywords for China’s private kindergarten industry in 2018 due to Chinese government’s move on laying out Opinions of the Central Committee of the Communist Party of China on Deepening Reform and Standardization of Early Childhood Education(《中共中央国务院关于学前教育深化改革规范发展的若干意见》) (hereinafter referred to as “Opinions”). As we analyzed in our second piece of the series Decoding 2018 China’s Education Market, in a country rife with regulatory risk, related policy may mark the end of the golden period of the thriving private kindergarten market for 20 years. 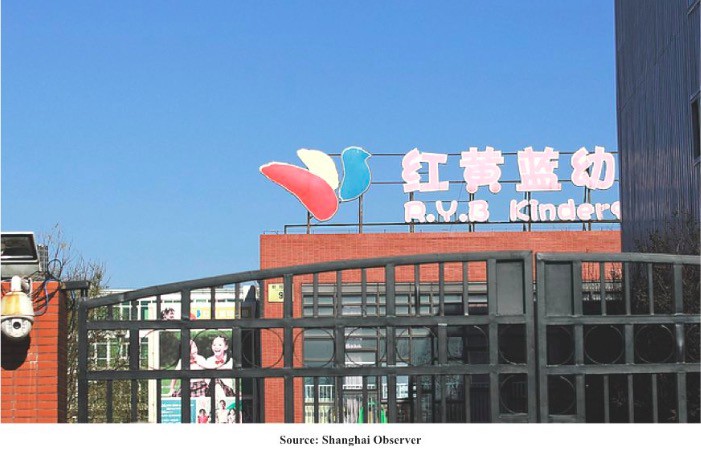 On the second day right after the release of the “Opinions”, New York-listed RYB education suffered trading curbs twice just within 20 minutes and its shares plunged more than 50% with an astonishing loss of nearly 250 million USD in market value overnight at NYSE. Other entities with business in this space listed in A-share concepts stock or Hong Kong stock were also severely hit. For example, Vtron shares hit limit down on the same day, and Maple Leaf Education shares slumped nearly 20%. Under such a disaster for stocks, the change of business strategy seems to be inevitable for those companies.

In the earnings season of 2019, listed companies that have adopted M&A as an expanding approach have revised their business blueprint, enriching self-developed products and targeting at the market for kids aged 0–3 and over 6. Affected by the reform, the entire kindergarten industry chain including kindergarten operators, kindergarten service providers, and kindergarten investors have given different answers towards how to react.

The golden age of private kindergarten market came to an end

“This (The Opinion) is likely to trigger an unprecedented turmoil in the industry.” Chen Xiaodong, Public Relations Director of the AI early childhood service provider Keeko(智童时刻), told JMD.

On November 15 2018, the State Council pointed out that private kindergartens are prohibited to be listed whether separately or as a whole part of assets. In this context, listed companies are not allowed to seek funding and issue shares through stock market any longer, or to purchase the assets of for-profit kindergartens by cash injection via equity market.

Four years ago, thanks to the attributes such as low barriers, massive market demand, and strong versatility, early childhood education was once the gateway for many A-share listed companies to penetrate education industry even revitalize their main business.

For instance, Vtron, in 2015, it acquired two preschool brands, namely Hoing Education and Golden Cradle, incorporating about 2,800 kindergartens into its business and becoming the company with the largest number of kindergartens in the early childhood education industry at that time. According to the financial report, the early childhood education business brought 189 million RMB ($27.4 million) to Vtron shares in 2015, accounting for one-fifth of the company’s total revenue.

In the US, RYB Education listed at the initial price of US$18.5 supported by the franchise chain business model and reached a peak of US$31.8 on October 3, 2017. Up to the month before the “Opinions” was issued, RYB still closed a large number of kindergarten M&A deals. On October 16, 2018, Matt Education, a parenting solution provider for 0–6 age group, announced that it would acquire 100% of Xiaohongmao Education with its 20% stock rights. At the same time, Zhang Mengyu, Founder of Matt, revealed the plan of filing for an IPO in the US. 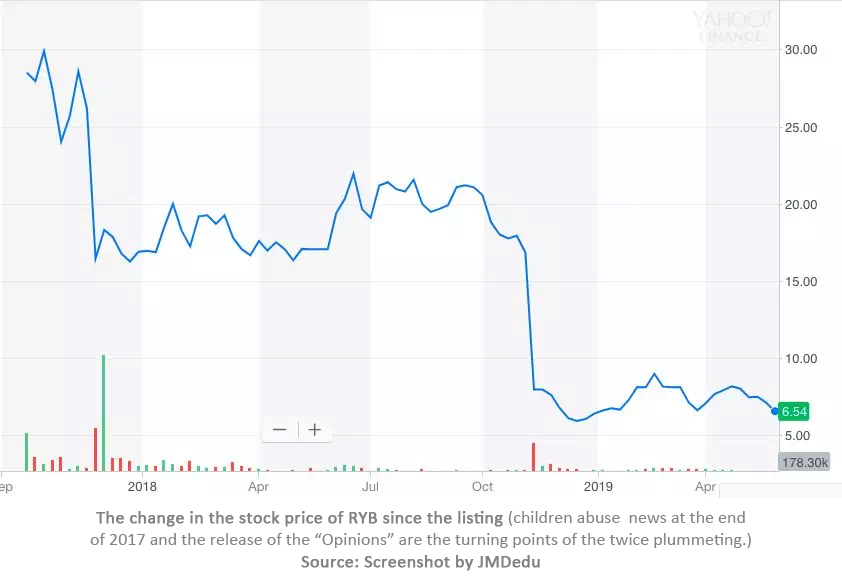 It seems that the IPO of RYB is more like the last glorious moment of the whole kindergarten assets in capital market. After government unveiled the new regulations, although capital story has come to an abrupt end, the norms for kindergartens have been further strengthened.

In January this year, the General Office of the State Council issued another document, the “Notice on Carrying out the Governance of Supporting Kindergartens in Urban Residential Areas”(《关于开展城镇小区配套幼儿园治理工作的通知》), requiring the kindergartens in urban communities to be handed over to local education administrative department without any profit-seeking behaviors. At the same time, in less than one year, the goal proposed by the “Opinions” has to be achieved that universally-benefit kindergartens, which meet the standards of local government, charge affordable tuition fees, and guarantee equality of enrollment, must account for 80% of the total by 2020. Since the private kindergartens originally occupied 63% of the market, they are destined to become the main force to transform.

“The government is stepping up this regulation unexpectedly. Fortunately, after the listing, our business has transformed to the technology and content fields from the previous focus on kindergarten expansion so we stopped acquiring any kindergartens.” A staff member of the 21st Century Education Brand Department Said to the Economic Observer.

Early childhood education business of 21st Century Education has been quickly adjusted, building the Internet Business Group as a new segment through acquisition. In the 2018 Annual Report, 21st Century Education once again stated that it will terminate the expansion of offline kindergartens and conduct competence-based education services for children and adolescents in an asset-light form.

21st Century Education was not the only listed company reaffirming their standpoint by public announcements. Although the education business contributed less than 10% of the overall revenue in 2017, Xiuqiang shares(秀强股份), operating and managing about 100 kindergartens and day care centers, immediately stated that they would suspend the acquisition of the education business after the publish of the “Opinions”.

Similarly, Vtron shares quietly removed the previous statement of “continuing the investment and acquisition of early childhood education groups with synergistic value” and “continuing to increase the number of service kindergartens through investment, M&A and industrial development” in their 2018 annual report. Instead, they proposed a new layout of developing a “Platform for Children Growth”, and advocated increasing their investment in daycare for children aged 0 to 3 and competency-based education for 3–8 age group.

Another way to react to the policy is to transform the kindergartens in the listed company system to be universally-benefit. However, this approach is still not perfect yet. Although government subsidies are available, profit model change means a decline in profit margins and narrowing the capital circulation space. 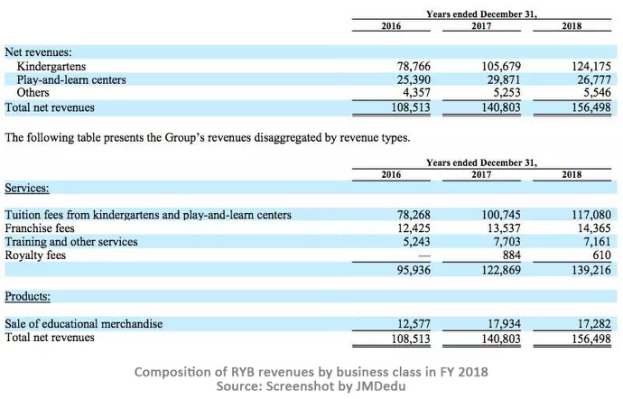 “From our practice, the difficulty of transformation lies in the ownership of property rights, up-front investment and some historical issues.” explained by Zhang Fan, Vice President of RYB. Wei Ping, CFO of RYB, also admitted that business adjustments may do harm to the company’s short-term profitability.

As for the operation, RYB changed the brand name from “RYB Education” to “GEH Education” in February this year. “RYB” will continuously be the brand of kindergarten and parent-child park while “GEH” will be loaded with more business lines and products.

However, all strategic layouts cannot be achieved by one-step. In 2018, the growth of RYB’s business slowed down overall and it went through a process from being profitable to suffering great losses. Since the release of the “Opinions”, the stock price has been fluctuating from a low of $6 to a high of $8 for a long time, wiping out around two-thirds of its market value compared with the number when it was just listed.

“The vast majority of acquisitions in the capital market have been suspended.” Zhang Xigao from New Future Education said that “there are only acquisitions in first- and second-tier cities, which required the objects must be for-profit, but the valuation is at least halved.” Among for-profit kindergartens, mid- to high-end are more favored. Even if it cannot go public, the long-term holding of high-end for-profit kindergartens can still bring margins and dividends. “The investment value of kindergarten industry can be more prominent amid capital winter” said Sun Wei, Founder of Winner Light.

“In a sense, current policy will be more beneficial to high-quality and high-end kindergartens.” Hong Jiezhou, head of a kindergarten in Foshan, Guangdong Province, said that “some high-end kindergartens I have known about are aiming to strengthen their soft power, such as exploring the brand value and expanding business spaces including childcare, study tour, international education, and teacher training, all of which ultimately point to developing into a comprehensive platform.”

In contrast, transformation space for the universally-benefit kindergartens is relatively narrow. Chu Zhaohui, researcher from China Academy of Educational Sciences, believes that although the universally-benefit kindergartens can benefit from government’s financial support, they are still unlikely to make efforts on curriculum design and teacher training due to the limited funds.

Apart from the high-end and the universally-benefit kindergartens, small and micro ones are a bit more special among the private kindergartens, which may have difficulty meeting the standards laid out by local government but conceive more innovative ideas and running models. At the moment, some cities have indicated positive signals of issuing business licenses to them such as Beijing and Guangzhou Tianhe District.

“Assets can’t be monetized quickly through securitization.” Hong Jiezhou said, “Matthew effect will still exist and good kindergartens are always favored.” In the current stage, enriching the business lines, paying more attention to quality and polishing brands are the main trends for both listed companies with building a comprehensive early childhood education platform and private kindergartens adjusting their business strategy for localization after the retreat of capital boom.