The 76th China Educational Equipment Exhibition held in Chongqing from April 26th to 28th was the biggest education trade show in China, which is quite similar to BETT in UK but more localized. As the vane of the market, this exhibition witnesses the reform and development of China’s educational equipment industry. JMD walked the exhibit hall and interviewed some educators in the industry to take the pulse and help you deep dive into this space. The challenges we explore from those local enterprises could illuminate the potential pain points overseas entities will also need to cope with in China’s footprint. 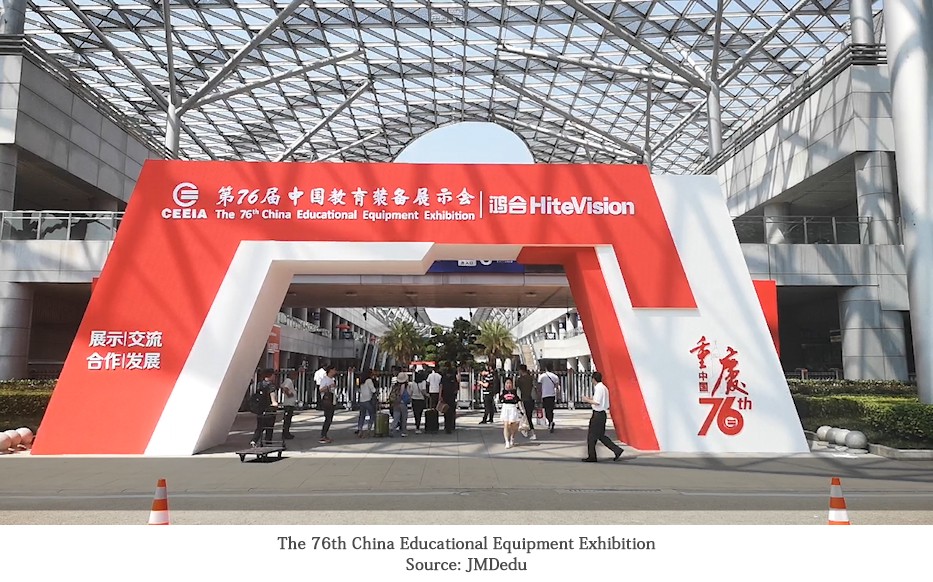 Occupying 180,000 square meters, the exhibition accommodated over 1,400 companies and showcased more than 25,000 products. According to official statistics, 100,000 people have attended the event during the three days, revealing the fact that there is still great room for toB market in China’s educational equipment industry.

As we pointed out in our “2018 Education Industry Report（教育行业蓝皮书）” that the service to provide technology solutions, products or content for the B-end has always existed, but in fact, the demand from the B-end has been really stimulated since last year. In this exhibition, sellers like companies and distributors, and buyers like public schools, educational institutions, and education bureaus come from all over the country to directly close deals, moreover, share business information and ideas. But under such a boom, in the process there are still many challenges from both ends which can also be blessings in disguise.

“I have visited over 50 booths in three days, but can hardly remember more than five products”, many visitors would resonate with this kind of feeling. From the perspective of the product itself, homogeneity and weak educational attributes are the pain points. A distributor told us that large companies could provide better solutions in the range they can cover than smaller ones but we saw little difference when it comes to their efficiency and how deep they will dig. “For example, I think the products of Seewo and HiteVision (both are interactive intelligent panel providers) are almost the same in terms of major aspects. Maybe the only disparity lies in how they look.”

Actually, these two major hardware vendors have indeed had some legal disputes. In 2018, Seewo’s parent company CVTE (002841) sued HiteVision for alleged patent infringement, claiming for 143 million RMB(US$20.8 million) compensation. In April this year, CVTE filed the lawsuit in the US and the claimant may reach tens of millions of dollars which is one of the largest patent infringement disputes in the field of education informatization in China, reported by National Business Daily.

As for educational attributes, an industry insider told JMD that education industry has higher thresholds in which technology solutions will only work when combined with specific teaching scenarios. “Like those eye-catching humanoid robots, they have been in the market for quite a long time but are weakly integrated with education and still rely on the performance interaction.” She said, “STEAM Education solutions, most of which focus on the stage of early childhood and primary school, but offer few tailored contents for middle school and lack an overall curriculum through the whole K12 period.”

What makes schools such a hard nut to crack?

There are reasons to believe the two problems we spotted hinder educational products to penetrate schools. From our observation, the products showcased at the 76th equipment exhibition fell mainly into two categories, (1) Education Informatization products cover the hardware (such as whiteboards, recording equipment), software (such as cloud management platform, online marking system), content resources and services (such as courses, teaching certificate training) demanded by schools, and (2) Science-Technology education can be roughly divided into coding (both hardware and software) and products for penetrating schools mainly providing laboratory construction, as well as a whole package of solutions. 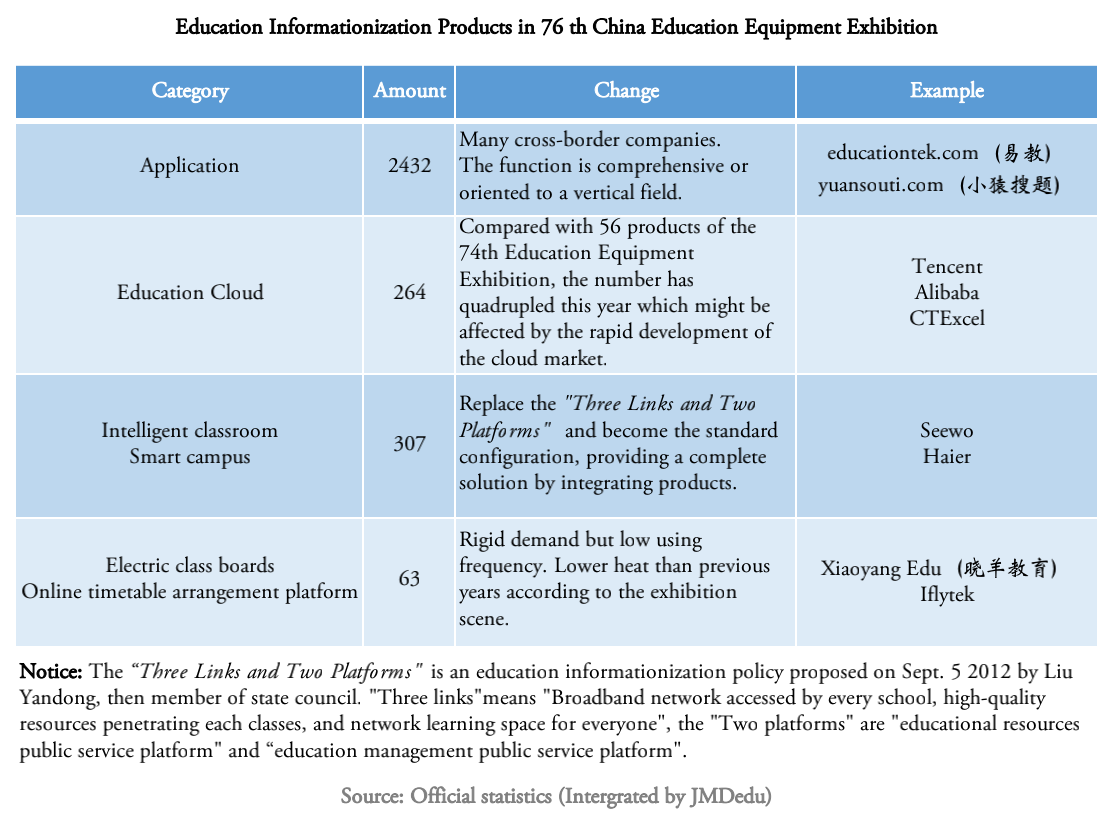 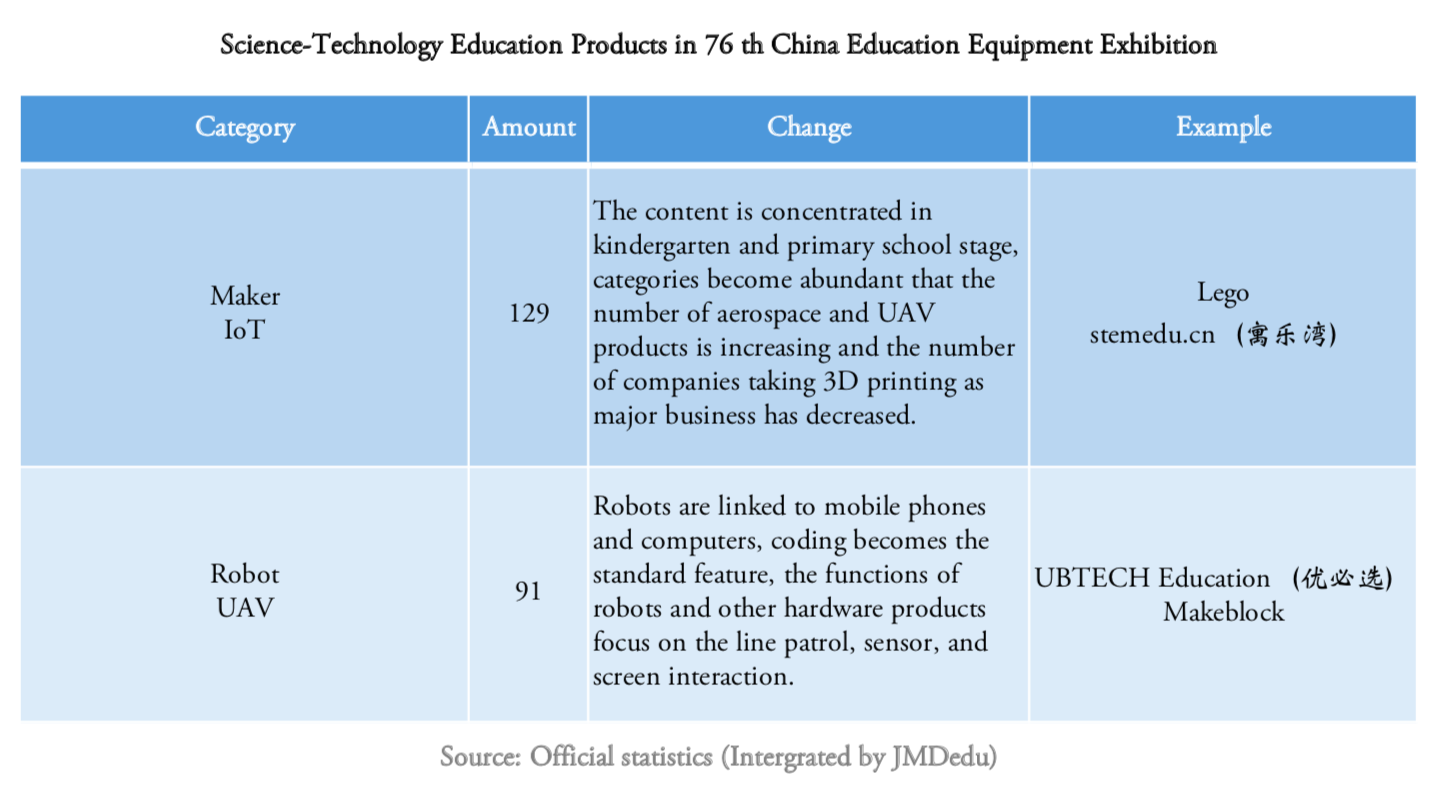 In addition, affected by the prevention and control policy of myopia, more than 50 related products are exhibited such as an appliance for sitting posture and the PurePad with technology of quantum dot but only a small fraction of them can be introduced into public schools, which is not only because of the homogeneity and weak educational attributes we mentioned above but also caused by the characteristics of public schools themselves.

On the one hand, as Yang Po, Associate Professor at Peking University’s College of Education, explained that the government and public outlook on public schools are completely different from what education market expects from institutions. The goal public schools always strive for is not the maximization of efficiency but the reputation and social impact and thereby forming a strong sense of risk awareness, discreet decision-making and policy-driven. For instance, a vendor has been plagued by how to consistently follow the two seemingly incompatible policies which firstly indicates that “Education Informatization 2.0, promoting the Combination of Education and Technology” but later also lays out that “Driven by prevention and control of myopia, teaching will be independent of Electronic Products”. “When communicating with school principals, many of them said that it is better not to use this kind of EdTech products under the context that the state has repeatedly emphasized on the protection of eyesight. That’s why I want to come here to take the pulse.” He also found that many schools plan to renovate their classroom lighting system this year. “I have heard that principals’ performance evaluation is largely contingent on students’ eyesight health, and the Education Bureau also echoed, so I think this will be a new business opportunity.”

On the other hand, whether public schools are capable to distinguish good or poor products also has some impacts. Since there is no third-party platform involved in the field of educational equipment that can provide authoritative evaluation, the high information literacy of school decision makers is entailed. “No matter the product targeting at the communication between home and school or the smart campus product, many customers have no sense of them, they prefer to pay for electronic whiteboards and AIO, the bigger the better.” Perhaps because of this, “Education Informatization 2.0” has focused on improving the “information literacy” and added the following aspects as one of the development goals of the 2.0 era including “teaching, learning applications”, “digital campus”, and “Internet + education” platform. “The road is tortuous but the future is bright”. The improvement of informational literacy still has a long way to go.

Although facing big challenges, many enterprises in this field still have made achievements in different business directions. Firstly, long-established hardware manufacturers as the carrier of all software systems like Seewo, HiteVision, Beijing Wenxiang and Changhong almost take turns to sponsor the equipment exhibition with naming rights. In addition, regional leading enterprises such as Lezhixing（乐知行）rooted in Beijing and traditional big corporations and tech giants such as BAT, Haier, CTExcel, and Iflytek committed to informatization by harnessing their own technology edge. Moreover, toC tutoring institutions like New Oriental, TAL and startups focusing on the vertical industry such as Xiaoyang Education and Xiaoyuan Souti have also occupied a considerable market share.

Overall, the current educational equipment market are fragmented where companies with diverse backgrounds make money around small fractions, even Iflytek with fairly complete product matrix serves only about 25,000 schools at the moment One of the possible reasons for the dispersion of profits consists in the disparity in economic development, policy orientation, and education expenditure among different provinces and cities.

The “Analysis” points out that the amount in East China is the highest mainly due to its wide coverage of provinces with higher GDP and large education expenditure, especially Jiangsu and Shandong. The substantial increase in the amount of the southwestern and northwestern is closely linked with the state’s strong investment in education informatization in regions lagging behind relatively: from 2014 to 2016, the central government accumulated the allocation of 97.8 billion RMB (US$14.2 billion) to comprehensively improve the basic conditions for school operation with weak compulsory education in less-privileged areas, among which the education informatization of rural schools is the focus and the baseline.

The other reason for the fragmented market could be the higher threshold of education equipment industry. “High cost, payment, facing vertical users and customized products” has always been the impression and understanding of B-end market. However, although belonging to the same segment, the needs of schools and training institutions are different. Therefore, the companies either follow with the Pareto’s principle to address the 20% customers that they consider to be the more important group or design much more comprehensive functions in order to meet the maximum needs, which just reflects the contradiction between product standardization and user customization requirements.

Apart from the fact that companies are devoted to collecting more data, we have also observed a new trend that the number of enterprises at the show this year with software copyrights and patents has increased significantly. In light of the official statistics, all exhibitors represent over 9,000 software copyrights and more than 35,000 patents which is not only a positive signal for the industry’s R&D environment and IP protection but also an opportunity and challenge for enterprises. We believe that an increasing number of companies will put data and patents as one of their core competencies. By that time, the balance between education and technology, buyers and sellers will come to another level.