Kid coding is among 2018’s hottest track in China’s education space with a dazzling growth of fund raising even amid the capital winter. Despite the overall investment slump, nearly $116 million was poured into this track with 33 deals according to the Blue Paper of Education 2018. The investment in terms of financing deals topped all other sectors. And up to now, the market size values around $580 million. The current wave in China for coding education is backed by governmental policy, which is a major driver.

Kid coding education on the rise driven by government 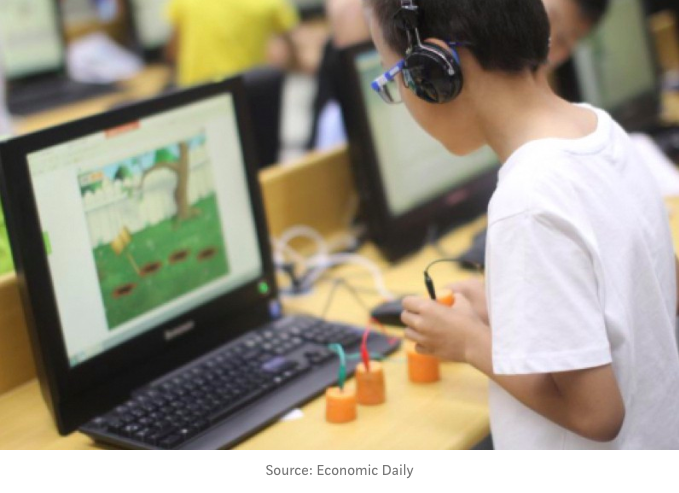 In July 2017, the State Council of China issued a plan for the development of a new generation of artificial intelligence, calling for AI-related courses in primary and secondary schools, the gradual promotion of programming courses and the introduction of exam-oriented credit systems for some robot competitions. The plan explicitly encourages the implementation of intelligent education programs for all citizens and seeks to popularize coding education for young students. And in March 2019, China’s Ministry of Education issued the “Essentials for Security of the Information and Networking in Education in 2019,” which again clearly indicated the full launching of the information literacy assessment of primary and secondary school students, and underlined the promotion of developing courses related to AI and coding for children.

With encouraging governmental policies, capitals began to flood into the market for kid coding education, and through marketing means, to advertise the benefits of learning coding for Chinese parents. Among the labels associated with coding are some American entrepreneurs with working experiences in the industry or an educational background related to computer science. For example, Elon Musk, CEO of Tesla, is said to have learned to program at the age of 9; Mark Zuckerberg, founder of Facebook, began to code at age 10, and former Apple CEO Steve Jobs and Microsoft founder Bill Gates both were able to program at 12 or 13. In China, learning coding is almost a necessary demand for children to become excellent among peers.

According to Cao Zhiqing, Director of Kada Programming Division of Netease, in the entire field of K12 education, kid coding accounted for 5.2% of Baidu searches. Although major subjects like mathematics and foreign languages take up more than 15% of all searches, considering its short history, 5.2% is still a strong sign of the great potential for kid coding education.

Education companies for coding have launched a wide range of educational contents and products that corresponds to the cognitive characteristics of children. For young children, interest is the key to effectively and continuous learning, which is very different from the emphasis of coding skills that adult programming training values. Compared with mastering a specific programming language and writing a lot of code, children’s coding focuses on developing algorithmic thinking patterns. Admittedly, coding education must involve learning a programming language. Compared with mainstream programming languages such as Java and C++, however, the languages children learn to code tend to be visualized, gamified and interesting.

At present, mainstream coding education for children mainly focuses learning to use the Logo language, the Kodu language, CodeMonkey, Scratch and other programming tools. Logo is a programming language that is very similar to natural language. Users write programs in the way of “turtle drawing”. Similarly, Kodu is a visual programming language developed by Microsoft, which enables the execution of complex logic by making use of a 3D game platform and establishing mapping relationships between dynamic game characters and programs. CodeMonkey is characterized by increasingly conspicuous cartoon animation and gaming rules. The programming environment is designed to be simple and lively, and the ideas behind programming are easy and interesting. Scratch is a graphical programming tool developed by the Massachusetts Institute of Technology in the United States. It is simple, fun and easy to use. As an introductory learning tool for coding training, Scratch is easy to operate and tends to be game-based without involving code. Learners can create simple games or interactive videos by dragging and dropping modules to the program editing bar under the guidance of the system.

In addition to emphasizing interest and training coding thinking, there are also institutions that use the Information Olympic, a popular academic competition in China, to attract the attention of Chinese parents . Many elite schools in China still rely on students’ performance in the Olympic to recruit talented students. To put it bluntly, as long as the trend of using test and competition scores as the baton for talent selection does not change, parents’ need of and positive attitude towards competition-oriented education will not change. This is in part determined by the national educational system in China. For well-educated Chinese parents, getting their children into elite schools is like stepping through the gates of Tsinghua and Peking University, China’s most prestigious universities. As a result, the number of students participating in academic competitions, including the Information Olympics that contains coding elements, will continue to grow, which means that coding education will only become more and more recognized and valued by anxious parents and students. This anxiety comes at a time when coding education is being promoted on a large scale in many developed countries. The future national competition is about artificial intelligence, and coding is the basic skill at AI era. Considering this, the life cycle of coding education will not be short. MagoRobot, seeing the strong demand of competition-oriented education, focuses on the feedback-based education, and combines authoritative competitions organized by education committees, science and technology associations, Ministry of Industry and Information Technology and competitions on a global scale with its two main course systems, robot education and coding education. Makeblock, a Sequoia-backed coding startup experiencing rapid growth thanks to government’s ambition to strengthen its technology might unfolds another story. On May 21, 2019, Makeblock released coding education products for different age groups, “Children’s Dot”, a robot product designed for younger children, and the Creation Box that targets the consumer market. The target customers of the mind-enlightening robot “ Children’s Dot” are children aged 4 to 9, consisting of the panda-looking exterior, the point control pen, the collage map, the drawing book for introductory programming, the programming card, elements for character dressing, etc. Among them, the point control pen can be used to read and recognize cards and the drawing book, exercise somatosensory remote control and remote lever control, and give vibration feedbacks, while the hardware part has feedback systems through facial expressions, voices and actions. Makeblock emphasizes that this product not only can keep children good company, but also is more than just a storyteller because the whole product is designed to focus on how to train children’s thinking abilities. Based on training coding, Children’s Dot can train such abilities as language expression, spatial reasoning, scientific and technological exploration through the point control pen and the coding card. The Creation Box is a STEM educational product for children over 8 years old. As can be seen from the product’s advertising slogan, “Learning programming at home, one box is enough”, this product takes the box as the medium to provide electronic and structural materials, gamified learning content and achievement badges, videos on programming and STEAM learning, real-time learning reports, etc. With the guidance of the box, children can learn about electronics, machinery, programming and other contents at home. 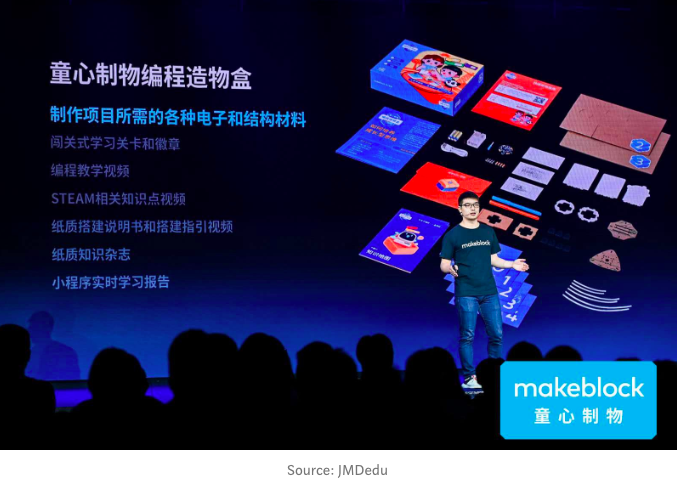 Challenges and problems can still be seen

Children’s programming education is on the rise in China. Even though its $580 million market value still cannot be compared to the country’s burgeoning English tutoring market, worth $8.7 billion, there is still great room for development. The market size is estimated to value over $4.3 billion in the next five years with a dazzling speed. Many innovative entrepreneurs and teachers are entering the industry, and their efforts will bring into the industry vitality necessary for rapid, healthy development.