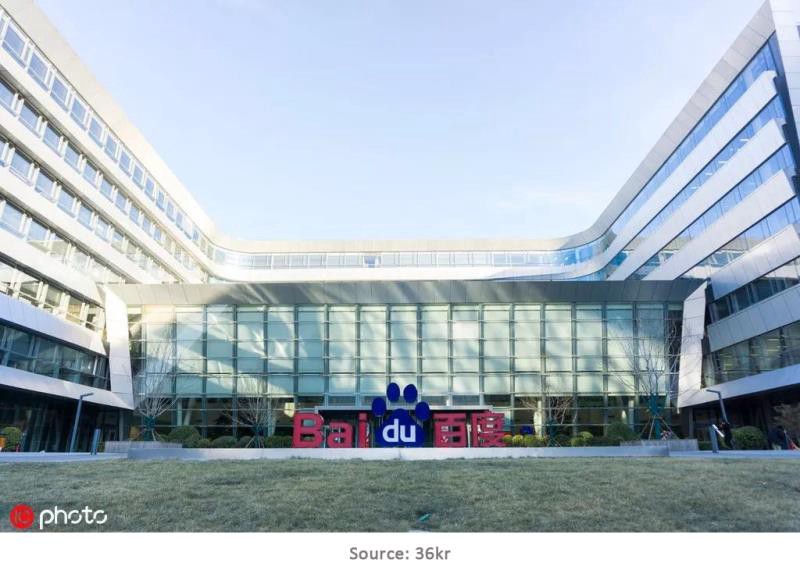 A few weeks ago, JMDedu reported that Tencent and Alibaba have expanded their business scope to the education market. In that piece, we also mentioned Baidu, unfolding another tale of how a pioneering Internet giant committed to education business in China. However, when the other two of BAT have ambitiously launched their new educational product matrix, Baidu now is facing a huge challenge. This article is mainly based on the work from a Chinese report covered by 36kr, China’s equivalent to TechCrunch.

According to Baidu’s insiders, their education business partners and other channels, it is reported that Baidu Education Division, which used to belong to Baidu EBG (Baidu Emerging Business Group), has been dismantled earlier this year. Baidu Education recruits around 400 employees with their main businesses focusing on Baidu Wenku, Baidu Reading, and Baidu Smart Class, etc. In December 2018, Baidu made a restructuring statement to upgrade its Artificial Intelligence and cloud computing unit to a business group referred to as ACG (artificial intelligence and cloud group), in order to facilitate the applications of AI technology to various industries. At present, Baidu Smart Class has been incorporated into ACG while Baidu Wenku and Baidu Reading are taken over by Baidu Content Ecological Department. In this context, there was no large-scale staff lay-off.

“The starting plan is to put the entire education department into Baidu Cloud, but the cloud business is more B2B oriented. After all, Baidu Wenku and Baidu reading are consumer-facing, making these two parts of businesses hard to be coordinated. Therefore the To C products are merged into the content ecology.” An insider said.

Baidu Education Division was established in late 2015, initially positioned as the “Educational E-Commerce Platform” for providing video courses. Its products range from Baidu Wenku which is internally incubated, to the the online education platform “chuanke.com” (later renamed “Baidu Chuanke”) acquired by Baidu in 2014.

Based upon Baidu’s original plan, they wanted to build a new online education portal which can be quickly supported by their huge online traffic as China’s largest search engine for disseminating the online courses. A former senior executive said in an interview: “Who can achieve the goal of taking a hit in education market among the BAT? The answer must be Baidu. We started from the search engine and it is the most convenient approach to access the service.” But problems have emerged afterwards because of this kind of consumer-facing traffic distribution strategy.

Firstly, the content of their educational products is not standardized enough. Users can directly purchase a mobile phone or refrigerator by searching and comparing the price. But when it comes to considering paying for online video tutorials which could last for hours or even weeks on the Baidu chuanke platform, they need to spend much more time to make the final decision. That is to say, Baidu’s natural traffic gained from its search engine function is not likely to promote sales conversions through online courses.

The more crucial factor in fact lies in contents. The optimal education platform that Baidu envisions relies heavily on high-end contents, which is exactly their drawback since the source of their contents lack in precision and authority. Different from the Cloud Classroom of Netease and Taobao Education from Alibaba which committed to exclusive teacher resources, we can see that there are a large number of personal accounts established by individual users for providing courses on Baidu’ platform due to their own benchmark system. Besides, courses lasting for several hours also discourage mobile users. Zhang Gao, who is in charge of Baidu Education, mentioned that 40% of Baidu chuanke’s users are parents in their 30s. This group of people often have difficulty investing large and constant study time and cannot concentrate on the video tutorials for even half an hour. Therefore, more “light” educational products are in high demand.

Actually, Baidu has already acknowledged this problem and taken a serial of countermeasures. In January 2018, Baidu chuanke posted a notice on the official website stating that the maintenance of the client-side would be shut down and the business would transfer to paid contents. Content products they provide now are courses around 30 minutes rather than hundreds of hours in the past. Moreover, the content orientation has also changed from the original style “learning C language with 0 basic” to hot issues such as “PUA” (Pickup artists) and Blockchain. 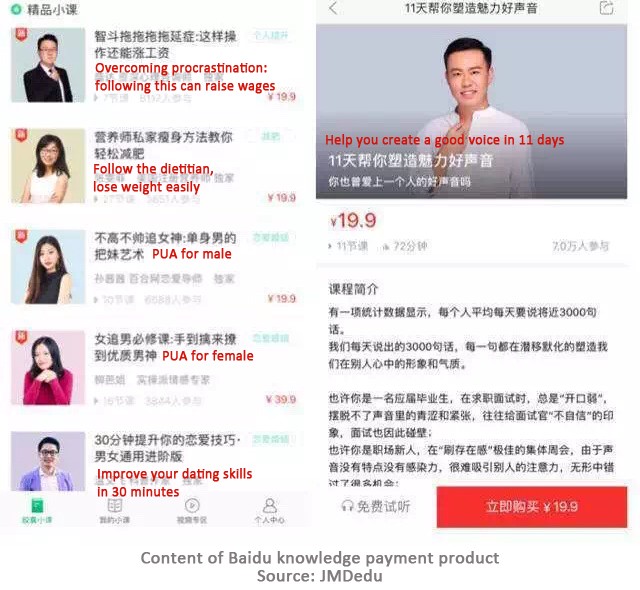 But this attempt didn’t turn out to be the perfect solution. On the one hand, the paid content sector at that time has already reached high market saturation. On the other hand, after Lu Qi joined, Baidu has established a strategic foundation targeting AI. Therefore, Baidu Education shifted its goal from the original To C model to the “AI+ Education” combining To C and To B.

As Baidu Education pays more attention to the To B business, Baidu chuanke and other To C business gradually lose support from the Baidu Group. According to the Interface News report: “the search traffic support Baidu chuanke obtained from Baidu even is much less than the traffic iQiyi (an online video platform) could leverage. If users search for the author and course of paid content products from Chuanke, there are no related results in the first three pages from Baidu’s own search engine.”

In addition, the reform from the technical side of “AI+ Education” has not fundamentally solved the problems regarding traffic distribution and lack of content sources faced by Baidu Education. “Educational products are highly dependent on content and operations. But given that Zhang Gao comes from a technical background, he always prefers to resort to technology for improving the efficiency of education. This is a problem.” A Baidu insider believes that.

In July 2018, we learned from several sources that Baidu chuanke was completely shut down and around 20 people from the team has now been transferred to other business units. The new content area on the App has also been ceased to update.

New orientation: take To B as a long-term strategy with Cloud business

Even though frustrated by the outcomes of its educational business, Baidu was not willing to give up this big cake. Corporate solutions will become the business focus of Baidu education. According to 36kr, Baidu Education’s original “Smart Classroom” business has now be restructured as the education department under Baidu Smart Cloud. An organization principal that has cooperated with the department disclosed to 36kr that Baidu Cloud is intensively seeking for cooperation with schools, educational institutions and any other units.

“Baidu Smart Classroom” was launched in September 2017 to assist teachers in preparing and teaching as core functions, ranging from primary schools to universities. In primary and secondary schools, the smart classroom can automatically identify the teacher’s teaching progress, and recommend teaching slides, share teaching plans, exercises, and other teachers’ experience. In higher education stage, the smart classroom can recommend professional learning materials for both teachers and students also helps to be connected with the educational administration system.

A recent cooperation program from Baidu smart classroom shows that its partners are divided into six categories including schools, individual teachers, publishers, online/offline education institutions, and educational related units. The specific cooperation form is that Baidu provides products along with technology research and development to replace the teaching resources provided by the cooperative schools, including teaching plans, slides, test paper and others.

Education is and will always a main focus for Baidu Cloud. During the ABC Summit in March 2018, Baidu announced the “Starting Campus Plan”, providing campus developers with the lowest price cloud resources to cover the basic cloud, intelligent operations, big data, Dueros and other technical services. “After Baidu Education’s business has been incorporated into the cloud business, this move has brought a lot of resources in terms of education channels, also allows Baidu cloud to find a new dimension in the process of expanding customer base consisting of schools and institutions.” A Baidu insider told 36kr.

Before this, Zhang Gao revealed that Baidu Education started an expansion of B-side users in 2017 H2, expanding into 1,000 schools within three months, and planned to cover 5,000 schools in 2018. According to reports from Chinese financial media, Baidu Cloud’s revenue target for this year is 10 billion RMB, more than triple the revenue Baidu Cloud earned in 2018 (3.3 billion RMB). In light of this, Baidu Education, which used to have ambiguous positioning and constantly shift its focus, is now finally integrated into a strategy that is more suitable.